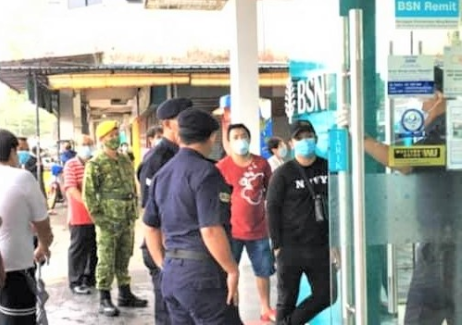 KUCHING: The local police are well prepared to control the influx of people who withdraw their Bantuan Prihatin Nasional (BPN) and Sarawakku Sayang aid from Bank Simpanan Nasional (BSN) branches.

District police chief ACP Awang Din Awang Gani said they had made early preparations to address overcrowding at the banks.

“Since 8am at both branches the public have maintained their social distancing by following the markings made by the banks,” said Awang Din.

Awang Din pointed out that members of the People’s Volunteer Corps (Rela) also helped to control the crowds.

The banks provided hand sanitisers, checked the temperature of each individual the premises and made sure that their officers wore face masks at their counters.

Only three persons were allowed to enter at one time, while those who queued outside were advised to wear face masks.

“Once they have settled their transactions they were not allowed to linger, but to leave immediately.

“The situations at both bank branches were very orderly and no unwanted incident occurred.

Pahang man duped into buying iPhone 12 at RM500 per unit