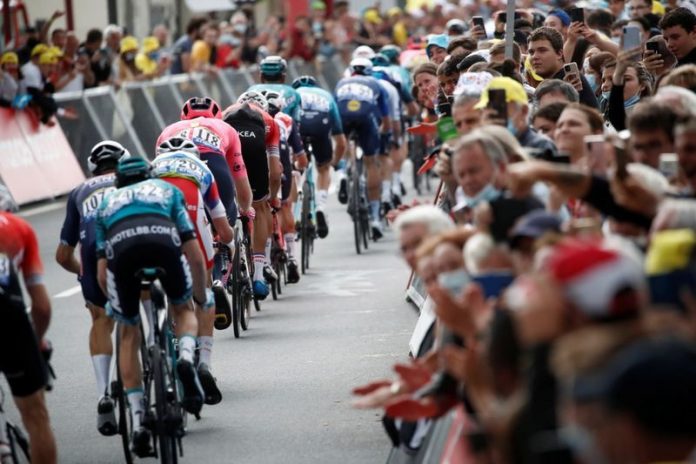 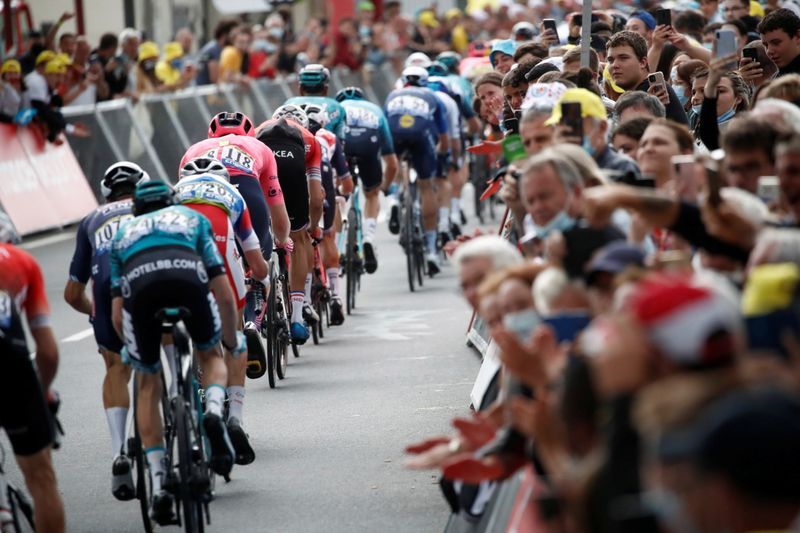 LAVAL, France (Reuters) – Professional riders have been asking for safer conditions on the Tour de France but the nature of their sport makes it almost impossible to avoid tumbles and injuries as tension and stress are at their highest on the biggest cycling event in the world.

After just five days of racing, the Tour peloton is battered and bruised after countless crashes wreaked havoc on the race, triggering a protest from the riders.

“Just looking around in the peloton I can’t remember seeing so many injured riders,” four-time champion Chris Froome, who himself was sent tumbling, told reporters.

Organisers and the International Cycling Union (UCI) have been targeted by some riders who demand larger roads, but with the number of traffic islands, roundabouts and speed bumps having been multiplied by six in the last 25 years in France, the request is an impossible one.

“Towns are now designed for cars to pass through at 30 kph and the Tour is coming with 180 riders charging through at 60 kph,” said Pascal Chanteur, a former professional rider who represents the riders’ union (CPA) on the Tour de France.

The nature of racing, with all teams looking to be at the front of the bunch to be safer, adds to the danger.

To avoid congestion in the last part of flat stages, when sprinters gear up for a high-speed finale, the UCI has designed a rule that states that any rider suffering a crash or a mechanical inside the last three kilometres is credited with the same time as the front group.

The riders’ union asked that this rule be adapted after a mass crash occurred four kilometres before the line in Monday’s third stage.

Some teams, like French outfit AG2R-Citroen, have their staff check all the stages from start to finish and film the whole route to help the riders better visualise upcoming danger.

For Jonathan Vaughters, the manager of the American EF Education-Nippo team, the Tour de France is a special race.

“It’s the only race of the year that no one uses their brakes. Last year was an exceptionally safe Tour. But this year seems to be back to normal,” he said.

With the stakes being so high on the Tour, one of the most televised sporting events on the planet, the lighter riders who contest for the overall title cannot afford losing precious seconds in the stage finale.

Through earpieces, sports directors instruct the whole team to bring their leader to the front and they find themselves thrown into the tumbler of a peloton with heavier riders at 60-70 kph – often making crashes inevitable.

“It’s two worlds colliding. Conditions are harder in the Flanders classics (one-day races featuring narrow, cobbled sectors) and there are less crashes because the riders taking part are used to it and they are shaped for it,” Jean-Rene Bernaudeau, the team manager of the Total Energies team, told Reuters.

“The route is not responsible for the crashes. It’s just that you don’t need the whole team to protect your leader and put him in front. One or two are enough. On the Tour the stakes are so high.”

Bernaudeau added that riders have been outstandingly stressed because of the COVID-19 pandemic.

“Recently they’ve been riding like the season could end eight days later because of the pandemic. It’s made them super stressed. COVID brought a lot of tension.

“We have to ease the pressure on the riders. I’ve asked my staff to do five stages where they ask nothing from the riders.”

The Hundred: Rashid Khan returns for Trent Rockets and lights up The Hundred