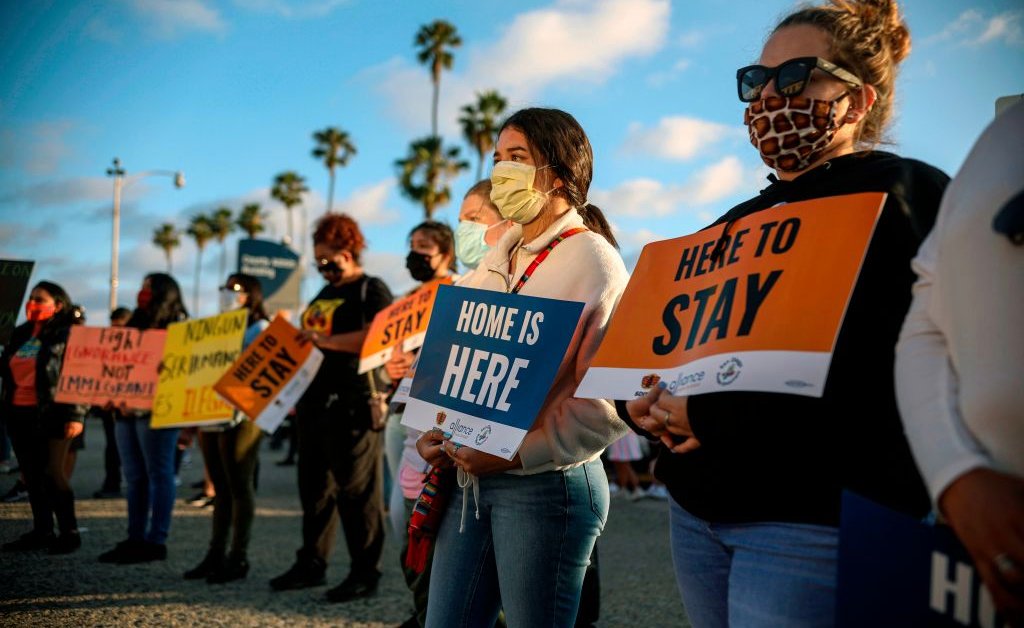 Deferred Action for Childhood Arrivals (DACA) is officially accepting new applications after the government fully reinstated the program on Monday. On Friday, a judge ordered the program to be fully reinstated to what it was before the Trump Administration attempted to rescind it in 2017, a reaffirmation of an earlier Supreme Court ruling.

DACA protects qualifying young people known as “Dreamers,” who arrived in the U.S. illegally as children, from deportation temporarily. It also grants work authorization, a social security number and access to Medicare.

DACA began as an executive action by the Obama Administration in 2012, protecting an estimated 645,000 young people from deportation, with the option to renew their application every two years. The Trump Administration terminated DACA in Sept. 2017, but the Supreme Court ruled in June 2020 that the government had not followed proper procedure to end the program, forcing the government to keep DACA alive and returning the program to what it was before Sept. 2017. In July 2020, Chad Wolf, Acting Secretary of the Department of Homeland Security (DHS), reinstated the program through a memorandum, but only for those who had already received DACA, without opening up applications to new potential recipients. It also limited the protections to one year with the option to renew.

“The reinstating of DACA is the bare minimum that has to happen when it comes down to the rights and the power of our undocumented community across the country,” Vanessa Luna, a DACA recipient and co-founder of ImmSchools, a nonprofit that partners with K-12 schools to support undocumented students, tells TIME. She adds that DACA is only a temporary fix, and that comprehensive immigration reform that includes a pathway to citizenship could be a permanent solution for young Dreamers and their undocumented family members. “So while we acknowledge this huge announcement and the impact that it has on the lives of many young people that have been here for many years…we also acknowledge that there’s a lot more work to do.”

Judge Nicholas Garaufis, of the Eastern District of New York, on Friday ordered the government to reinstate DACA fully and immediately, restoring it to what it was prior to Sept. 2017, because of the Supreme Court decision, plus the fact that the court had ruled previously that Wolf was not lawfully serving as acting secretary of DHS, his memorandum on DACA had to be vacated.

DHS did not immediately respond to TIME’s request for comment. In a public announcement of the ruling on the DHS website, the agency wrote “DHS will comply with Judge Garaufis’ order while it remains in effect, but DHS may seek relief from the order.”

An estimated 1.3 million people have become eligible for DACA since the Trump Administration terminated the program in Sept. 2017, according to the Migration Policy Institute, a nonpartisan research organization. The 1.3 million are among those who can now submit their applications for the first time. Those who had already received DACA before Sept. 2017 will have their protections extended from one year to two years with the option to renew.

Tom Wong, associate professor of political science at UC San Diego, predicts many first-time DACA applicants may be facing a decision about whether to apply now while Trump is still in office, or wait until Jan. 20 after President-Elect Joe Biden is sworn in as President. The Biden Campaign had promised to reinstate DACA in its first 100 days in office.

A potential DACA recipient can submit an application, Wong says for example, but it is unclear whether other changes have been made to review those applications fairly. “One unknown,” Wong says “is whether or not the updated language from USCIS is just lip service to the court order or if it means a full resumption of the program.”

Garaufis has ordered DHS to provide data on DACA applicants, including first-time applicants and how many were approved and denied, by Jan. 4, 2021.

The new application will cost $495 to file. Organizations like ImmSchools are planning to provide legal and financial resources to aid in the application process.

For Dreamers like Ramon Sanchez, a 24-year-old from Texas who was born in Mexico, the new court order means he can go back to renewing his application and paying the application fee every two years instead of each year. He received DACA when he was 16, the same year President Barack Obama implemented the program. By now, he says, he’s used to the application renewal process, but understands how daunting it can be for new applicants.

“Have hope,” he tells TIME. “Own it. I used to be embarrassed of [DACA], and I used to feel like I couldn’t tell people because I was scared of being deported or being incarcerated. Now I yell it loud and proud.”

Both Sanchez and Luna said they were confident the incoming Biden Administration could expand DACA. Luna believes the Biden Administration could include young people who were brought to the U.S. after 2007, or create a plan similar to Deferred Action for Parents of Americans and Lawful Permanent Residents (known as DAPA), an Obama program intended to be a pathway to citizenship for undocumented parents of American children or children who are lawful permanent residents that was blocked in court and rescinded by the Trump Administration.

At the moment, the only category of people who qualify are those have lived in the U.S. consecutively since 2007 and who arrived in the country before their 16th birthday. Those with criminal records are not eligible.

Rugby: Rugby-No shortage of spirit but England still in search of cutting edge