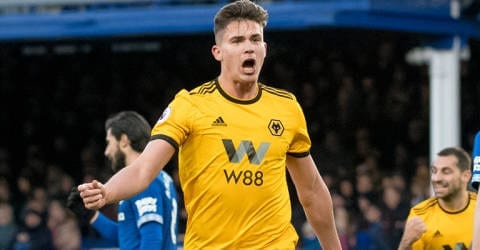 The victory lifts Wolves above Manchester United into fifth place, two points behind fourth-placed Chelsea, although they have played a game more than both teams.

The loss is another blow for Villa in their battle against relegation and leaves them second from bottom on 27 points.

The decisive moment came when Raul Jimenez swung a ball in from the left flank and Jonny did well to set up Dendoncker, who opened up enough space to drill the ball into the bottom corner.

Wolves had the better of the game throughout, keeping possession in midfield while Villa struggled to create openings against a well-drilled Wanderers back line.

Villa had a let-off, two minutes before the break, when their keeper Orjan Nyland threw the ball straight to Diogo Jota but the Wolves forward wasted the opportunity.

Wolves have now won all three of their games since the restart following a three-month stoppage due to the COVID-19 pandemic.

“I think we performed well in terms of our organisation and in terms of staying in the game. We approached the game really well. We didn’t settle down early on, but once we had a couple of opportunities we started to control the game and create more chances,” said Wolves boss Nuno Espirito Santo.

Villa have picked up just two points from their last six games and while they are level with Bournemouth and West Ham United, they have played a game more and their next match is at champions Liverpool.

Dean Smith, the Villa manager, lamented his team’s schedule and felt his team had deserved more.

“We more than watched a top six team today but they managed to get a goal from the edge of the box out of nothing and we didn’t convert the chances we had,” said Smith.

“I thought today was about fatigue. It is crazy to play four games in 11 days, and you will get fatigued doing that,” he said.

FA Cup quarterfinals mean the match was the only Premier League fixture on Saturday. – Reuters

Other Sports: Olympics-Six German athletes test positive for COVID on arrival in Beijing-team

Rwanda says two soldiers detained in Congo have been released