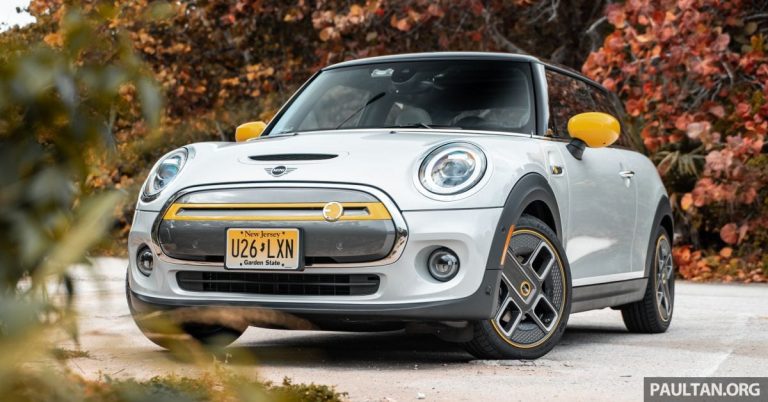 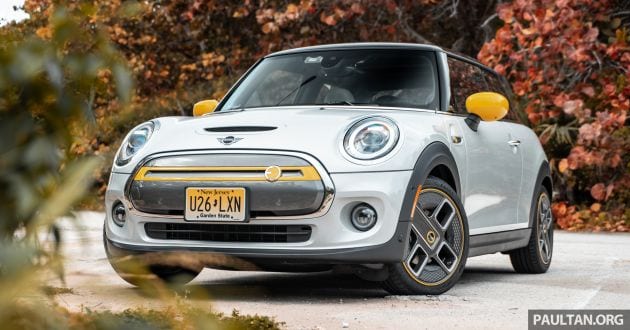 The original 1950s MINI was born when fuel was scarce and strictly rationed. Those familiar with the story will know that the microcar went on to be a massive hit, and it’s still one of the most recognisable cars in the world to this day. Sixty years later and under the stewardship of the BMW Group, the MINI brand has once again made history with the introduction of its first-ever, mass-production electric vehicle.

Meet the MINI Cooper SE, or MINI Electric for short. The emissions-free car has been teased as far back as August 2017 at the Frankfurt Motor Show, clad in the familiar low-slung, two-boxed body of the F56 Cooper 3 Door hatch.

The version you get to drive home today doesn’t look quite as aggressive as the concept, with MINI clearly favouring the evergreen identity of the outgoing hatch, that is by retaining the circular LED DRLs and Union Jack LED tail lights. The electric yellow highlights littered throughout the car (both inside and out) are unique only to the Cooper SE, but MINI also offers the standard palette for those who want a more subdued look.

From a design standpoint, there’s nothing offensive about the Cooper SE. In fact, the theme on the very car you see in these pictures is how I’d like it to be – clean, distinct, and immediately identifiable. Like most EVs, the front grille is deliberately closed off to improve aerodynamic efficiency, and MINI says the electric powertrain doesn’t require all the extra cooling. And the vented bonnet? That’s just for aesthetics. 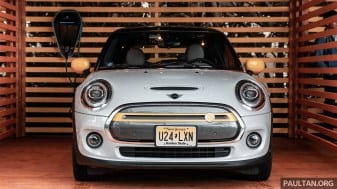 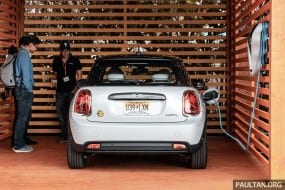 Standard rolling stock is the 16-inch Revolite Spoke wheel, but the 17-inch Power Spoke wheels – originally called Corona Spoke, but has since been renamed for obvious reasons – fill the arches better. The latter is wrapped with the same 205/45 profile run-flat tyres as the regular Cooper S 3 Door. Rear end differentiations include the yellow MINI E badge and a pipeless diffuser.

The yellow theme continues into the cockpit, adorning the start-stop ignition toggle, gear stick and dashboard with bright lemon-esque accents. Behind the steering wheel is a brand new, suitably-sized 5.5-inch digital instrument panel, flanked by the power gauge on the left and battery charge meter on the right.

The matte finish proved effective in cutting glare when driving along the sun-soaked roads of Miami, and the display doesn’t bombard the driver with too much info. Only the bare essentials are provided, such as available range, speed limit, and current drive mode – all evidence of thoughtful design. Drivers can also quickly access various multimedia functionalities through the steering controls, or get status readouts when charging the vehicle.

As for everything else, well, it’s pretty much identical to the 3 Door hatch, right down to cabin and boot space (unchanged at 211 litres). Saying that the Cooper SE is nothing more than a retrofitted 3 Door with an electric powertrain may sound like an oversimplification, but that is quite simply the case. But to MINI’s credit, this is a far more practical solution compared to the MINI E that was rolled out in 2008. 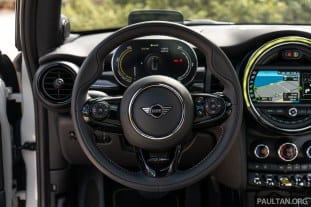 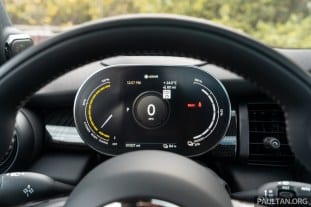 The Cooper SE rides on the same UKL subcompact architecture as the 3 Door and 5 Door hatches, and its electric propulsion system is essentially a repackaged version of that found in the BMW i3s. That’s honestly a clever way of managing R&D resources, and the retrofitting is done without sacrificing usable space in what’s already a tiny cabin. But it’s not without compromises.

First of all, the lithium-ion battery pack had to be designed from scratch to fit the underside of the floor (vacated by the exhaust system), which takes the form of a T-shaped unit. The rated gross energy content is 32.6 kWh (net content is 28.9 kWh), which can theoretically provide enough juice for up to 234 km (WLTP cycle; 270 km on NEDC cycle), assuming you don’t have a lead foot.

That kWh rating is slightly lower than the i3s’ 42.2 kWh capacity (offering up to 345 km of range), but remember, the Bimmer was designed and engineered as an EV from the get-go. If you ask me, the more stylish MINI easily makes up for the deficit, and the only real chore here is to cultivate the habit of charging your car, or risk being stranded with an empty “tank.”

Speaking of which, charging can be done via both AC and DC outlets, with the car supporting up to 50 kW DC charging (this uses the CCS Combo 2 connection). This juices up the battery from zero to 100% in 1.4 hours, but most owners will likely use an AC outlet instead. 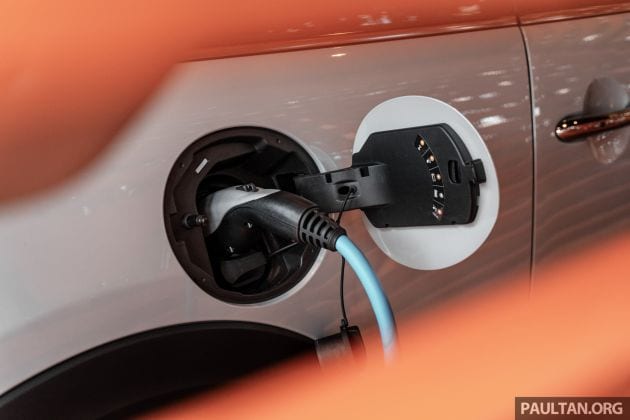 If you’re planning on using the Cooper SE every day, we suggest bundling the 22 kW MINI Wallbox Plus (RM6,500) together with the purchase of the car. You can always use the three-pin charging cable that comes with the car, but be prepared to wait a little bit – plugging this into a regular single-phase domestic socket will charge the battery from zero to 100% in about eight hours, so best do this overnight.

There’s also an optional Type 2 cable (RM1,388) that allows you to charge the car at various public charging stations littered around the Klang Valley. It’s a decent investment, even though you’d really only use it if you’re desperate for a charge, as most public chargers in Malaysia are of the slower 3.7 kW variety.

And because you’re buying a MINI EV, the LED indicator in the charging port changes colour (from red to orange, yellow and green) to denote charge levels. Neat party trick there, MINI. 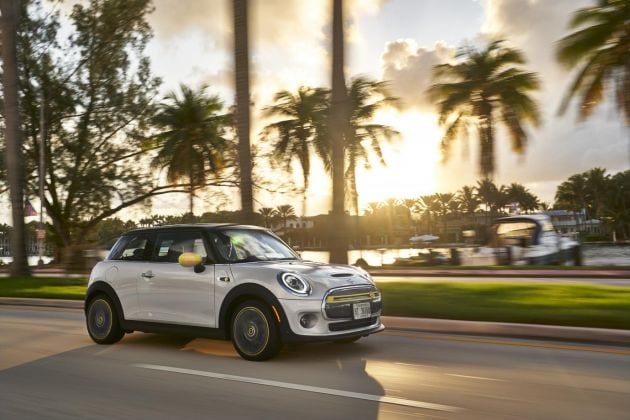 Like any modern MINI, you’re welcomed with the typical chimes when “booting” up the car, only this time a swooshing sound effect precedes the chime. The thing about electric cars is that, unlike its petrol or diesel counterparts, there’s absolutely no need to wait for the engine to warm up on a cold start. It’s an eerily liberating experience and one that comes in really handy when you’re rushing between places.

At the heart of the Cooper SE is a single 135 kW electric motor mounted up front, generating 184 hp and 270 Nm of torque. This is routed to the front wheels through a single-speed transmission with integrated differential, enabling a zero to 60 km/h sprint in 3.9 seconds. There are no shift paddles here, folks.

MINI claims that the pace matches several conventionally powered sports cars, but performance starts tapering off slightly past the 60 km/h mark. For instance, the Cooper SE does the century sprint in 7.3 seconds, which is 0.6 seconds slower than the comparably powerful Cooper S 3 Door (192 hp, 280 Nm). But at 1,365 kg, the electric hatch weighs a full 145 kg more.

Electric cars are typically heavier than their conventional engine counterparts, but this fact is easily masked with near-instant torque delivery. In Sport mode, throttle response is at its sharpest, and this is again demonstrated in the 80 km/h to 120 km/h sprint, which it does in 4.6 seconds. Just, keep in mind that there’s a 150 km/h speed cut. Otherwise, there’s more than enough grunt for the typical city use. 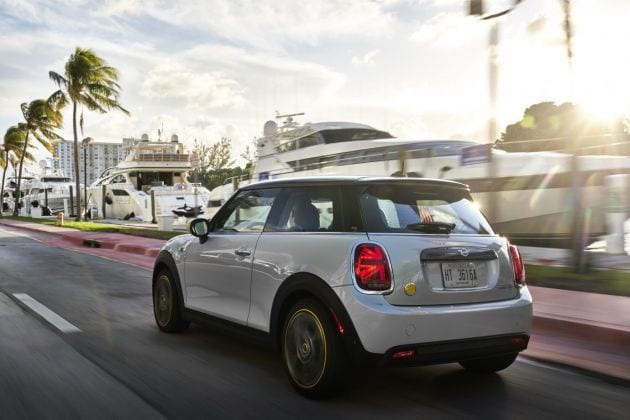 Our half-day drive along the coastal roads of Miami was exactly that – typical urban setting with abhorrent pre-Covid traffic. While we would’ve preferred having a mix of B-roads for a more incisive look into its dynamics, MINI’s latest clatter-free city slicker isn’t meant to be that.

It may be slower and heavier on paper, but these aren’t what we consider to be major downsides. Sure, the extra weight is brought upon by the battery, but remember, the weight is more evenly spread between the axles, which means better weight distribution and a lower centre of gravity (this is despite having raised the car by 18 mm, so you won’t have to scrape through those monstrous road humps).

The electric motor also weighs far less than the B48 2.0 litre four-cylinder petrol engine, making the Cooper SE feel lighter on its two front feet and less prone to pitching and understeering. It also makes do without the firmer sports suspension offered on the Cooper S, a decision most urbanites will be happy with, as did I.

The familiar MINI incisiveness is retained. Steering is precise and confident (if a little dead off-centre, but that’s no bad thing), the ride is far from punishing, and the entire driving experience is generally serene. Shame we didn’t get to sample that 12-speaker Harman Kardon sound system, though. 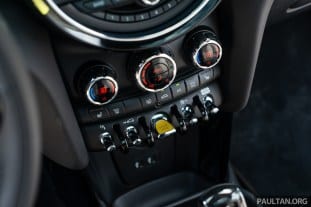 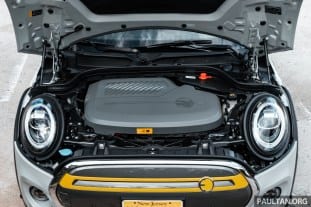 Unfortunately, we were unable to properly stretch its legs because the test route was predominantly set in an urban environment. This is understandable – MINI intends to market the Cooper SE as a real solution to emissions-free urban mobility. Perhaps every marketing material of the EV features a city as a backdrop.

As illustrated in the E-talian Job video, the Cooper SE is an amalgam of MINI’s longstanding fun-to-drive ethos, and the industry’s push towards reducing CO2 emissions. For many developed markets, EV purchases are commonly incentivised, either via tax exemptions, purchase rebates, tax credits and even free charging/parking in the city. Great and valid reasons to buy a new company car, we think.

It’s also comparably cheaper to maintain and service due to fewer moving parts. There’s no fan belts, air filter, and spark plugs. Plus, the brakes last longer because EVs all come with a brake regeneration system (a process where kinetic energy created during deceleration – even without pressing on the brakes – gets recoup to charge the battery), as opposed to applying mechanical friction. 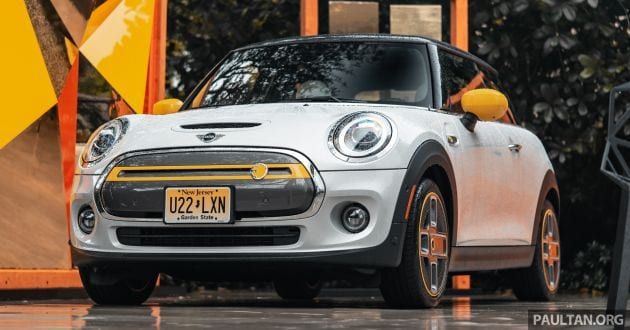 As a matter of fact, the Cooper SE features two brake regen thresholds – -0.19 m/s/s and -0.11 m/s/s, but let’s just call them ‘strong’ or ‘weak’. Selectable via a toggle right next to the start-stop switch, the ‘strong’ regen mode offers a more aggressive deceleration profile, allowing drivers to experience single-pedal driving. The ‘weaker’ mode decelerates more naturally, much like that of a combustion engine car.

To further drive home the urban mobility message, the Cooper SE can be equipped with a pretty impressive suite of safety systems. The sole variant that’s on sale in Malaysia comes with Matrix LED headlights, Parking Assistant, as well as MINI Driving Assistant.

MINI Driving Assistant is a camera-based system that offers traffic sign recognition and light city braking function (also known as autonomous emergency braking or AEB), the latter complete with forward collision warning and pedestrian detection. AEB here works between 10 km/h to 60 km/h, though when driving at higher speeds, the system will prime the brakes for quicker response times and shorter stopping distances. 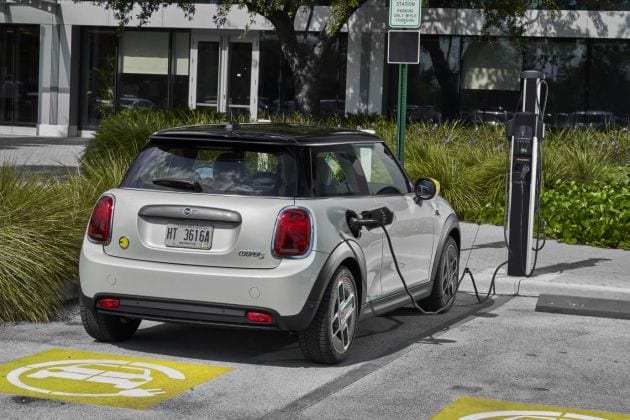 Everything that has been mentioned above is included for RM218,380 (with 50% SST waived), a price point we – and some of you readers – find to be surprisingly on the affordable side, especially for a premium electric vehicle. Remember, the BMW i3s was priced close to RM280k at launch, and the existing Nissan Leaf teeters just above the RM180k mark.

Given the price and equipment level, the Cooper SE makes for a very compelling option. It’s not for everyone, and it certainly won’t sell in big numbers. But it ranks among the small pool of new cars that actually excite, and it’s easily the most alluring (and stylish) electric vehicle money can currently buy. How serendipitous.

If you’re less susceptible to the herd mentality of typical Malaysian car buyers, then you know there’s no other EV in contention, unless you’re specifically targeting grey-import Teslas. If you’re up to it, I say go for it. And while you’re at it, be sure to check out our opinion piece on EV charging infrastructure, and whether or not you should buy an electric car today. But, a Cooper SE as a third car? If you could, why not?