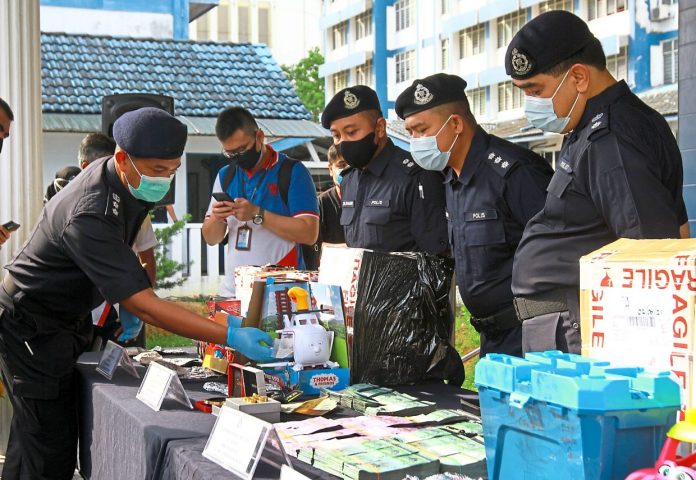 PETALING JAYA: The watchful eye of a courier service worker led to the eventual bust of a drug syndicate that used toys for their smuggling activities.

The group concealed what police believed to be heroin in toys before sending them out of the country.

Each successful package delivered would have netted the group around RM1,000 with sources confirming that 11 such packages had been dispatched.

Police seized six of those packages that were sent.

At a press conference at the district police headquarters, Petaling Jaya OCPD Asst Comm Mohamad Fakhrudin Abdul Hamid said the police were tipped off by a staff member of the courier service on June 2.

“He noticed something amiss after he scanned the packages.

“The police were called and we found 408.35g of suspected heroin inside four toy packages meant to be delivered overseas, ” he said yesterday.

Following the discovery, a series of raids was conducted, leading to the arrest of three suspects aged between 24 and 32.

The raids were conducted in Batu 9, Bandar Damai Perdana, Jalan Kepong and Taman Taming Jaya on June 2 and 3.

In an unrelated case, five men, including two foreigners, linked to a slew of stolen vehicles in and outside the district have been arrested by the police.

“On June 3, a police team raided a car park near Jalan PJS 2B, where two suspects were seen dismantling car components. Checks showed that the car belonged to a complainant who had lodged a report on May 29.

“The suspects then brought the police to a nearby location where three more suspects were arrested.

“The group was in the midst of dismantling suspected stolen cars, ” said ACP Mohamad Fakhrudin.

Thirteen car frames were found, six of which had been reported stolen.

“Three of the suspects had prior records, including one who had nine previous criminal cases and three for drug-related offences, ” he said, adding that the suspects were aged between 22 and 33.

With these arrests, ACP Mohamad Fakhrudin said the police had solved at least four stolen car cases in the district, and five similar incidents outside Petaling Jaya.

On current movement control order enforcement statistics, he said the district police had issued 121 summonses worth RM319,000 from June 1 to 4, mostly for not complying with physical distancing rules or wearing face masks.