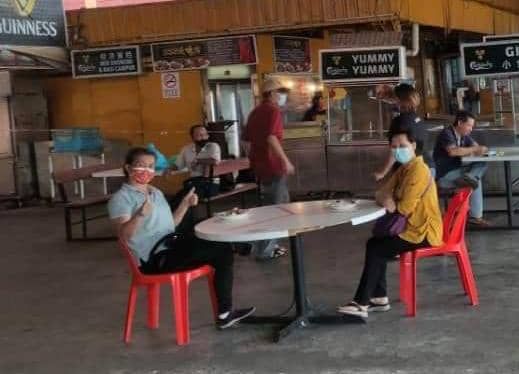 KOTA KINABALU: Eateries in Sandakan are allowing dine-ins but others in Sabah are taking a wait-and-see approach as they await the Federal Government’s decision on relaxed standard operating procedures (SOP).

The re-opening of dine-ins from Saturday (July 3) was disclosed by the Sandakan Council president Wong Foo Tin in a statement to Astro Awani on Friday (July 2) night.

However, there was no official announcement available on the council’s website and there is confusion across the state after Chief Minister Datuk Seri Hajiji announced SOP relaxations for certain economic and social activities.

Many eateries in Sandakan are allowing dine-ins but doubt remains in the state capital here, with some sticking to takeaway orders only.

In Sandakan, Wong said only two persons per table are allowed with 50% capacity at the premises. Operating hours will start from 6am till 8pm and all existing Covid-19 prevention-related SOPs such as scanning MySejahtera, temperature checks and social distancing must be observed.

Senior Minister (Security) Datuk Seri Ismail Sabri Yaakob said that all states should not have their own set of SOPs.

Sabah was not among the five states allowed to make the transition to Phase Two of the National Recovery Plan from July 5 as announced by Ismail Sabri on Saturday (July 3).

The announcement adds further confusion to the situation in Sabah as the state announced relaxations from June 29.

Many who provided dine-ins said that they were following the announcement made by Hajiji.