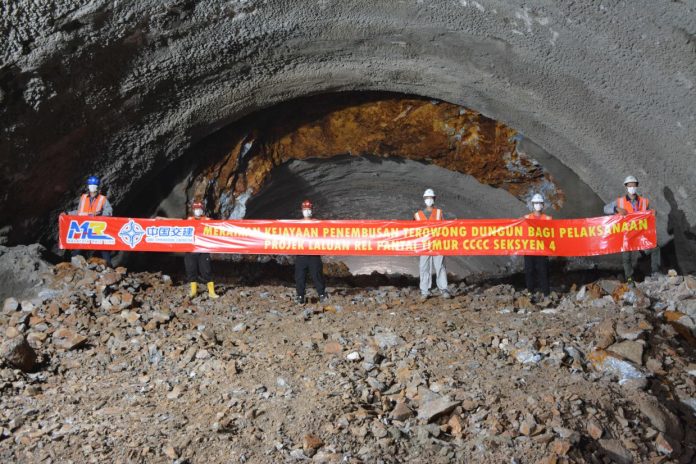 KUALA LUMPUR: The East Coast Rail Link (ECRL) project has recorded another major milestone as it achieved a tunnel breakthrough at the 871 metres single-bore Terowong Dungun in Terengganu six months ahead of schedule.

Malaysia Rail Link Sdn Bhd (MRL) chairman Tan Sri Mohd Zuki Ali said the overall infrastructure works for the tunnel was expected to be completed by the second quarter of 2022, months ahead of schedule barring any unforeseen circumstances.

“We are pleased that the ECRL project is still progressing slightly ahead of schedule at 22.62 per cent as at May 2021 despite the COVID-19 pandemic which effectively reduces work hours and manpower at project sites, ” he said in a statement today.

MRL said the tunnel excavation works for Terowong Dungun had progressed to 97.4 per cent prior to the breakthrough, while its permanent lining had rose to a decent length of 702 metres.

With a tunnel height of 11.8 metres and width of 12.9 metres, Terowong Dungun was constructed to avoid major open cutting and to preserve forest reserve when travelling across the Kuala Dungun area, it said, addingTerengganu will feature five ECRL tunnels upon the completion of the project.

Mohd Zuki said the ECRL project has 58 tunnels encompassing different lengths and landscape to be constructed along various sections of its 665-km rail alignment.

He also anticipated strong collaboration and knowledge sharing between MRL and China Communications Construction (ECRL) Sdn Bhd (CCC-ECRL) to smoothen tunnel excavation and deliver such engineering feat as per schedule or even earlier.

MRL, a wholly owned subsidiary of the Minister of Finance Incorporated, is the project and asset owner of the ECRL while CCC-ECRL is the EPCC contractor.

Scheduled for completion by December 2026, the 665-km ECRL will traverse Kelantan, Terengganu and Pahang before linking the Klang Valley on the west coast of Peninsular Malaysia.

Bangkok plans to keep museums and temples open until midnight

How to Add Klarna Payments to WordPress (2 Easy Ways)