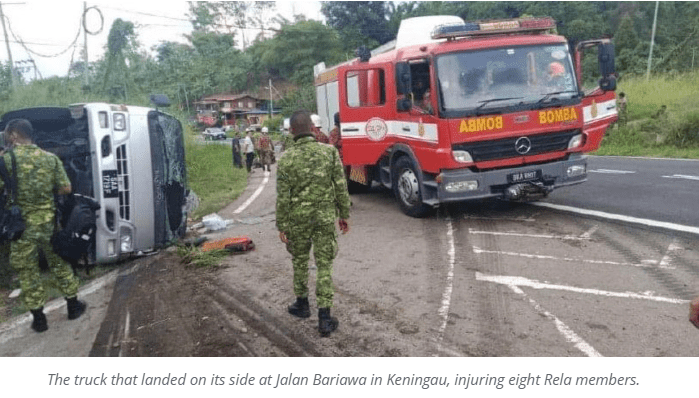 KENINGAU: Eight People’s Volunteer Corps (Rela) member suffered injuries when the truck they were travelling in crashed at Jalan Bariawa, here on Wednesday.

Sabah Rela director Mohd Pauzi Jhumat said the incident happened around 4.20pm as the victims were on their way to Keningau to deliver food aid to villagers affected by the Covid-19 pandemic.

“The food and other aid supplies were donated by the Social Welfare Department to be delivered to villagers affected by the Movement Control Order (MCO) due to the Covid-19.

“While on the way to Keningau from Sook, the truck skidded and landed on its side.

“Fortunately, none of the Rela personnel was seriously injured. Most of them only sustained minor head, body and foot injuries,” he said yesterday.

Mohd Pauzi said the injured members were then taken to the Keningau hospital for outpatient treatments.

Meanwhile, Mohd Pauzi said a total of 991 Rela officers and personnel had been involved in assisting the police and the Malaysian Armed Forces in roadblock operations during the MCO.

“The agency is always ready to assist the government in any crisis,” he said.

J-League match off after Nagoya players test positive for virus

BREAKING: Japan has officially declared a state of emergency