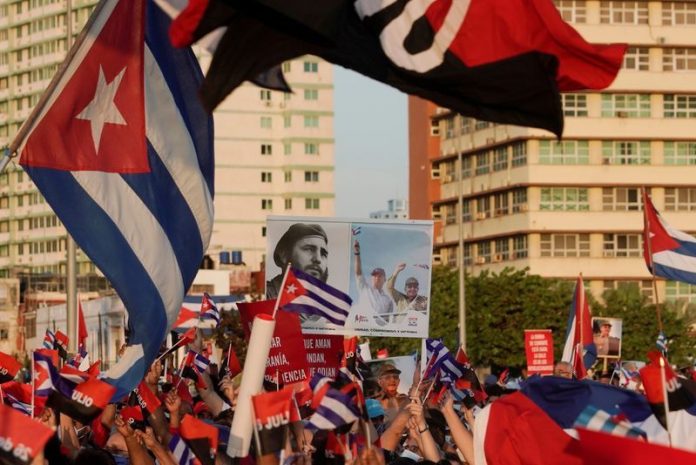 (Reuters) – Years before becoming president of Cuba, Miguel Diaz-Canel pushed for greater public access to the internet at a time when it was only available to a tiny minority. He would eventually succeed in getting much of his country online.

The Cuban government has accused independent media outlets largely based in the Miami area of provoking the unprecedented, spontaneous protests that spread across Cuba a week ago.

One of the sites it singled out, ADN Cuba, slants its coverage against the government in Havana at every turn. It recently published a photograph of Diaz-Canel that was altered to look like a police mugshot. “Genocide,” it said underneath.

Its coverage of the protests has concentrated heavily on the people hurt or detained. For days the site led with a story that the nephew of a senior Communist Party leader called on his family and the government to “lay down your weapons” and “listen to the people.” Another headline reported protesters in eastern Cuba shouted “murderer” at Deputy Prime Minister Ramiro Valdes.

One recent front page featured separate headlines on the latest news and views from musicians Pitbull, Lenier Mesa and Maykel Osorbo, while also reporting that Silvio Rodriguez, a longtime ally of Cuba’s government, was trying to “rescue” artists who have abandoned the government.

Around a dozen such Cuba-focused news and magazines have their websites blocked in Cuba, but Cubans can access them anyway using virtual private network (VPN) services, and share them on social media sites generally available in Cuba.

Some relentlessly berate the government while others, though still critical, strive for more fact-based journalism like the pioneering outlet 14yMedio.

The independent site El Toque, which also has a number of Cuba-based staff, published an article debunking false anti-government reports and out-of-context photos circulating on the internet that grossly inflated the size of the demonstrations.

While it is difficult to measure the impact of the U.S.-based sites on recent protests in Cuba, the government there certainly sees them as a menace.

He accused opposition media of working for the U.S. government, which funds a number of Cuban opposition media websites with hundreds of thousands of dollars per year, according to U.S. records published by the Cuba Money Project.

Protesters in Cuba have also spread messages of discontent and word of protests on social media platforms, mostly Facebook, and encrypted messaging services such as WhatsApp, Signal and Telegram.

Many of those sites were blocked following the protests, prompting U.S. President Joe Biden to say he would review whether Washington could help Cubans regain internet access.

Even without U.S. help, Cubans find ways to see censored content with circumvention tools such as Psiphon. The company says up to 1.4 million Cubans were using its application to see banned content on some days last week, up from 18,000 per day before the protests.

That would mean 20% of Cuba’s estimated 7 million internet users used that one tool to get around censors.

In 2013, when he was heir apparent to former President Raul Castro, Diaz-Canel said that continuing to ban the internet in Cuba was an “almost impossible delusion that doesn’t make sense.”

Internet access gradually expanded after that and the landscape changed dramatically in December 2018 when Cubans were able to get internet service on their mobile phones for the first time.

“Since December 2018 these outlets have gained a huge island audience and left the official media even more exposed as propagandists,” Henken said. “They (the Cuban leadership) miscalculated in that they didn’t realize that this would very quickly, in two and a half years, blow up in their face.”

Rodriguez last week accused ADN Cuba and others of carrying out a plan for which “U.S. imperialism has worked for a long time.”

The U.S. government does provide financial assistance to media outlets critical of the Cuban government.

A company closely associated with ADN Cuba received $410,710 from the U.S. Agency for International Development to promote human rights in Cuba last year, journalist Tracey Eaton reported via the Cuba Money Project, which tracks the spending through public records and Freedom of Information Act requests.

Another anti-government website, CubaNet, received $300,000 from USAID in 2020, its director acknowledged.

Once a biweekly newsletter printed in Miami, CubaNet now has a team in Cuba in defiance of the authorities, and has published stories on the apparent wealth of the Castro family.

Director Hugo Landa said “we have never hidden” the U.S. funding and that U.S. officials have never tried to influence coverage.

“If we ever felt any pressure from any of our funders to influence our content, I would renounce that support,” Landa said.

With or without U.S. funding, the sites are trying to reach readers like Jorge Norris, a 35-year-old IT engineer in Cuba, who uses a VPN to read sites such as Diario de Cuba and 14yMedio along with official Cuban media.

“It’s another view to be able to form an idea of what’s happening in the world,” Norris said. “You have to be completely informed of what they say here in Cuba and in the world.”