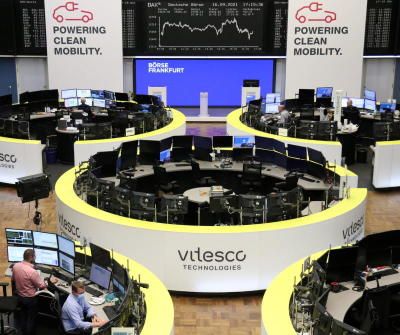 BENGALURU (Reuters) – European shares tumbled over 2% to a near two-month low in early afternoon trading on Monday as growing solvency worries about property group China Evergrande spooked investors, in a dour start to a week packed with meetings of major central banks.

“More significant from the perspective of world markets is the concerning situation with huge Chinese property developer Evergrande, which appears to be teetering on the precipice with concerns about contagion from the situation infecting the wider economy in China. This is particularly bad news for miners,” said Russ Mould, investment director at AJ Bell.

The U.S. Federal Reserve’s policy meeting on Tuesday and Wednesday is in focus as the central bank is expected to lay the groundwork for a trimming of its massive pandemic stimulus. Overall, 16 central banks are scheduled to hold meetings this week, including in the UK, Norway, Switzerland and Japan.

“To be sure, the (Fed) is set to default to keeping the QE (quantitative easing) spigots open at this week’s (meeting), given the sizable August jobs disappointment alongside a spotting of soft economic indicators,” said Vishnu Varathan, head of economics and strategy at Mizuho.

“But this merely defers taper. By how much is the question.” German shares fell 2.7% as data showed a bigger-than-expected jump in producer prices last month.

In its biggest ever overhaul, the blue-chip German index began trading on Monday with an increase in the number of constituents to 40 from 30.

China-exposed luxury stocks such as LVMH, Kering , Hermes and Richemont fell between 2% and 3.2%, extending sharp losses from last week.

Meanwhile, Europe’s fear gauge jumped to a near eight-month high.

Daimler AG shed 4.5% as a report cited the chief of its truck division, the world’s largest, as saying the unit had seen the supply of crucial chips tighten further in recent weeks.

Lufthansa rose 1.2% after saying it expects to raise 2.14 billion euros ($2.51 billion) to pay back part of a state bailout that Germany’s top airline received during the coronavirus crisis.

All major European subindexes were lower, with healthcare , utilities, food and beverage and real estate posting the smallest declines.

(Reporting by Sagarika Jaisinghani and Shreyashi Sanyal in Bengaluru; Editing by Arun Koyyur and Sriraj Kalluvila)