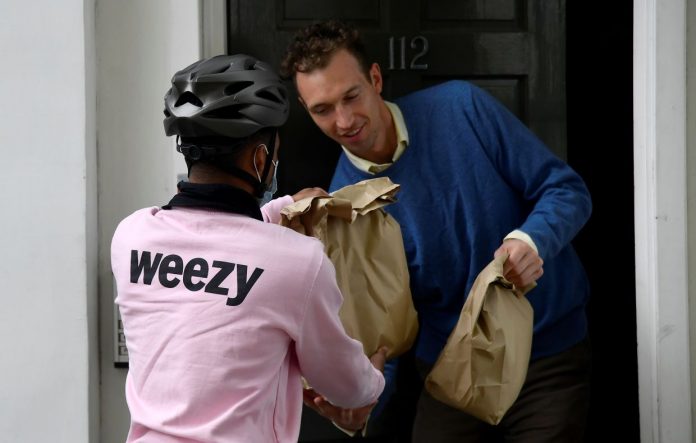 LONDON: In a railway arch in south London, pickers and packers are in a race against time: to get fresh food to the door of Alastair Dean within 15 minutes of his order hitting an app.

Their company Weezy is part of a new army of European rapid delivery firms that, backed by billions of dollars of venture capital from Europe, the United States, China and Japan, are using electric bikes and scooters to deliver groceries.

They have placed a bet that demand for convenience will drive the next transformation in food retail and help crack the vice-like grip of the big supermarket stores which, in Britain, supply 95% of the country’s groceries.

The boss of one of Europe’s biggest supermarkets, speaking on condition of anonymity, told Reuters that far from dismissing the new services as hype, they could pose “death by a thousand nibbles” to the dominant chains such as Tesco and Sainsbury’s, Aldi and Lidl.

Weezy enables shopper Dean, a 32-year-old finance worker, to select locally produced goods for delivery to his door for a fee of £2.95 (RM17.32). When ordering shaving foam he will throw in salad leaves for dinner.

“Time is precious in the 21st century,” he said on his doorstep in the affluent London district of Pimlico. “The world of going and doing your weekly shop, like I remember growing up – it’s all completely changed. We’re always last minute.”

The combination of cash, tech and the surge in online delivery in a pandemic has shaken the kaleidoscope for the grocery industry, creating new players, challenging others and providing a new frontier for traditional supermarkets.

The trend has taken root across European cities, where e-commerce giant Amazon has yet to properly gatecrash the grocery market.

In central London, residents have been bombarded with offers from at least four new rapid services.

The likes of Weezy, Getir, Dija and Gorillas store goods from major suppliers and local producers in urban mini-fulfilment centres to supply customers at prices similar to supermarket convenience shops.

Holding up to 2,000 items instead of the more than 20,000 in supermarkets, mini centres built for delivery rather than customers can be picked quickly and located in cheaper areas.

Weezy co-founder Alec Dent said orders had jumped since Britain started to unlock from Covid restrictions and people’s lives became more complicated. Once they know they can rely on 15-minute delivery, he said, anything longer seems too slow.

“The industry is huge. It’s a £200bil (RM1.17 trillion) market, and it’s rapidly moving online and rapidly moving in the direction of convenience,” Dent said of the British grocery sector.

Turkey’s Getir has launched aggressively in London, with its purple and yellow scooters seen on roads and billboards, after it raised US$300mil (RM1.24bil) in March, valuing it at US$2.6bil (RM10.77bil).

Berlin-based Gorillas has a valuation of more than US$1bil (RM4.13bil) after it raised US$290mil (RM1.20 trillion), including from China’s Tencent. “I strongly believe our business model is going to be the new normal,” chief executive Kagan Sumer told Reuters.

US operator Gopuff, valued at nearly US$9bil (RM37.29bil) has bought Fancy to expand in Britain and Europe, while Dija has been backed by Creandum, which invested in payments firm Klarna and Spotify.

The different services are testing minimum order fees and delivery charges, or no restrictions at all, to see what works.

While the model has high costs and low margins, its riders are classed as workers, giving them basic rights and making the groups less vulnerable to future regulation. In full control of the supply chain, they can also deliver at speed.

The challenge remains stark however, as seen in the finances of German-based, €26bil (RM131.56bil) Delivery Hero.

Present in over 50 countries, the group has a long-term core-earnings margin target of 5% to 8%. However its rapid commerce division traded at a margin of minus 33% in 2020, its first year of operation.

“It’s no secret that this is very tough economically, but we have found a way to make it work,” Ostberg told Reuters ahead of the launch of its fast commerce service in Germany.

Quick delivery operators say that low rents, ordering direct from suppliers and the option for brands to pay to promote goods on an app all help.

With so much activity, the supermarkets are watching and know they must respond in time.

Online delivery has always posed a challenge, as supermarkets make more profit when customers browse instore. But the pandemic turbocharged the trend, and improved the economics of delivery. A record 16% of UK grocery sales were made online in January.

Now they risk losing out to ultra fast delivery, or confronting the cost of reconfiguring operations – most online orders are still picked by staff instore alongside traditional shoppers, an option that does not work when time is key.

“Shareholders would say ‘if I want to invest in immediate delivery, I’ll just invest direct’,” said one senior executive at a major British supermarket of the challenge ahead.

Tesco, Britain’s biggest supermarket, is hedging its bets. While it is trialling its own one-hour delivery with a £5 (RM29) delivery fee, it is also building a handful of automated urban fulfilment centres at the back of stores just for online orders.

Ocado, an online pioneer which runs out-of-town warehouses and trucks to stock the shelves of middle-class Britain, has partnered with a courier firm to test faster orders in London.

Co-founder Tim Steiner questioned however just how many people would need instant delivery. “I’m not saying it’s a fad, but I think that some people’s expectations of the size of the market are massively out of whack,” he said.

Still, the rapid delivery groups say the initial reaction has been strong, and there is a road to profitability after consolidation. Shopper Dean is sold.

“We have a small kitchen with a small fridge,” he said. “The convenience thing is huge. Now we can finish work and fifteen minutes later we’re cooking our evening meal.” – Reuters