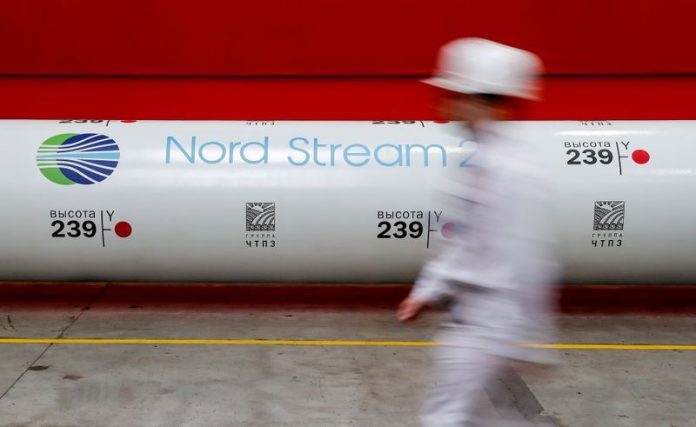 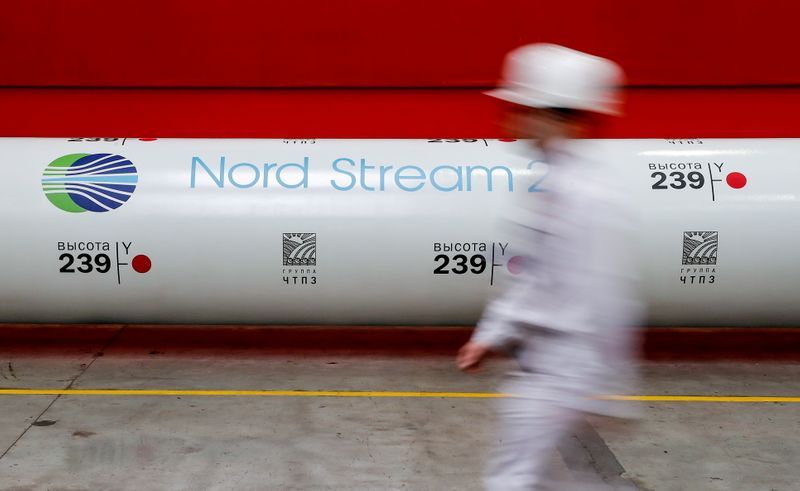 WASHINGTON (Reuters) -The United States and Germany are expected to announce in coming days a deal resolving their long-standing dispute over Russia’s $11 billion Nord Stream 2 natural gas pipeline, sources familiar with the matter said on Monday.

President Joe Biden and German Chancellor Angela Merkel failed to settle their differences over the undersea pipeline when they met last week, but agreed Moscow must not be allowed to use energy as a weapon against its neighbors.

A deal is now in sight after discussions among U.S. and German officials about U.S. concerns that the pipeline, which is 98% complete, will increase Europe’s dependence on Russian gas, and could rob Ukraine of the transit fees it now collects on gas pumped through an existing pipeline.

An agreement would avert the resumption of currently waived U.S. sanctions against Nord Stream 2 AG, the company behind the pipeline, and its chief executive.

Details were not immediately available, but the sources said the deal would include commitments by both sides to ensure increased investment in Ukraine’s energy sector to offset any negative fallout from the new pipeline, which will bring gas from the Arctic to Germany under the Baltic Sea.

“It’s looking good,” said one of the sources, who spoke on condition of anonymity because the talks are still ongoing. “We expect those conversations to reach resolution in coming days.”

A second source said the two sides were nearing an agreement that would assuage concerns raised by U.S. lawmakers, as well as those of Ukraine.

Derek Chollet, a senior adviser to Secretary of State Antony Blinken, will meet with senior Ukrainian government officials in Kyiv on Tuesday and Wednesday to reinforce the strategic value of U.S.-Ukrainian ties, the State Department said on Monday.

One of the sources said the United States was eager to ensure that Ukraine supported the expected agreement with Germany.

The Biden administration concluded in May that Nord Stream 2 AG and its CEO engaged in sanctionable behavior. But Biden waived the sanctions to allow time to work out a deal and keep rebuilding ties with Germany that were badly frayed during former President Donald Trump’s administration.

In addition to assurances by Germany about its willingness to “reverse flow” gas to Ukraine if Russia ever cuts off supplies to Eastern Europe, the sources said the agreement would include a pledge by both countries to invest in Ukraine’s energy transformation, energy efficiency and energy security.

It was not immediately clear whether both countries would announce significant government investments, or whether they would seek to leverage private investments in Ukraine.

Art meets spirituality in a timepiece inspired by Japanese culture

Bitcoin bounces back after tumbling below US$30, 000 threshold