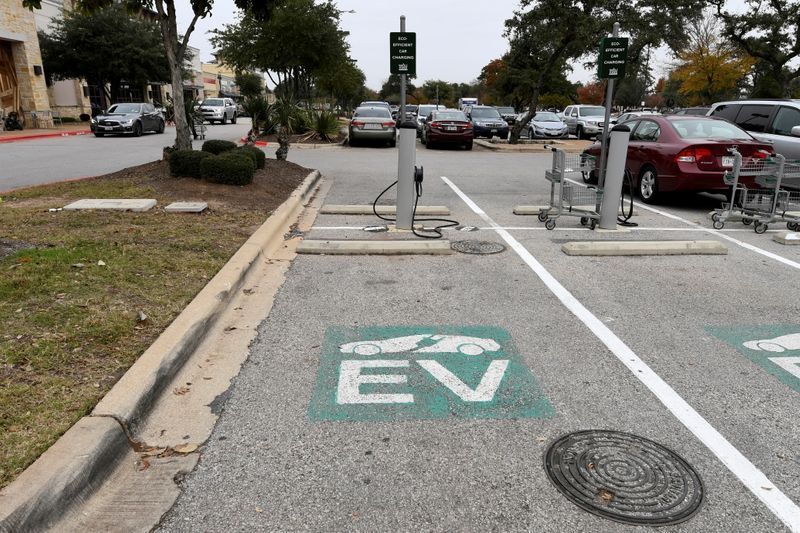 Here are five facts about the U.S. EV charging network:

Level 1 chargers use a regular 110-V outlet, just like standard home plugs, but take a long time to charge a vehicle battery. They are considered a solution by some to get charging into older apartment buildings, allowing residents to drive 30 to 40 miles (50 to 65 km) on an overnight charge.

Level 2 chargers offer higher-power output and use a 240-V outlet just like clothes dryers or air conditioners. They are used in residential and commercial settings, such as shopping malls and parking garages, and can top up an EV in about five hours.

DC fast chargers (DCFC) allow for the fastest charge by allowing direct current into the battery without first converting it from alternating current, which Level 1 and 2 chargers use. DCFC uses a 480-V outlet and can top up a vehicle in under an hour. But they are costly to install and less prevalent than Level 2 chargers, and not all EVs can fast-charge, with throughput limited by hardware and software.

Level 2 chargers cost between $2,000 and $5,000 to install, with many subsidies available for residents and businesses to cover upfront costs.

Providers recoup those investments by charging higher rates. While charging at home costs around 16 cents per kilowatt hour, public Level 2 chargers cost around 44 cents and fast chargers up to 59 cents per kwh, according to a PwC analysis.

For a graphic on charger economics: https://tmsnrt.rs/3sPxbsZ

EV owners who rely on public charging will face significantly higher bills than those charging at home, altering the total cost of ownership calculation for EVs.

While Level 1 and Level 2 charging uses a standard connector that works with all EVs, there is no such standard for fast charging.

That has resulted in carmakers installing different charging connectors on their vehicles, with primarily Japanese manufacturers using one connector and U.S. and European carmakers another.

Tesla Inc has developed its own unique connector, but offers adapters to allow Tesla owners to charge at stations other than Tesla’s Supercharger network.

Tesla CEO Elon Musk in July said the company would make its Supercharger stations available to other EVs later this year.

The United States currently has a total of nearly 43,000 public EV charging stations and around 120,000 charging ports, according to U.S. Department of Energy data. Of those, the vast majority are Level 2 chargers.

Chargers are distributed very unevenly across the country, with California having nearly the same amount of charging stations as the 39 states with the lowest count combined.

For a graphic on uneven charging in the U.S. click here: https://tmsnrt.rs/3DjRDY2

EV-supportive policies by other states, particularly Colorado, Utah and in the Pacific Northwest and the U.S. Northeast, have expanded charging station on a per-capita basis in recent years.

For a graphic on per-capita charging stations, click here: https://tmsnrt.rs/3jk8MsI

The European Union currently has nearly 275,000 EV charging ports, according to data by the European Alternative Fuels Observatory, or around 62 charging points per 100,000 inhabitants. The United States has roughly 37 ports on the same per-capita basis.

There are more than 300 EV charging companies globally, including nearly 100 in North America. Many are less than five years old and few are more than 10 years old.

Of them, eight companies have gone, or agreed to go public in the past year through SPAC-backed reverse mergers, including EVgo Inc, Nuvve, ChargePoint and Volta Charging in the United States.

Investors have poured more than $2 billion into EV charging startups, according to Pitchbook, with most of the funding flowing in the past five years.

Corporate investors in EV charging startups come from a range of industries, including carmakers such as Toyota Motor Corp and Daimler AG; oil and gas companies including Shell, and Chevron Corp; tech companies such as Qualcomm Inc and eBay Inc.

Many charging stations are also subsidized or run by local governments or electric utilities.

(Reporting by Tina Bellon in Austin and Paul Lienert in Detroit; Editing by Dan Grebler)