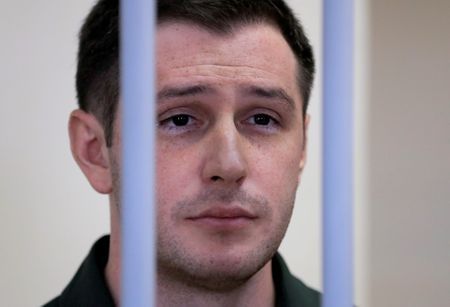 WASHINGTON (Reuters) -The families of two former U.S. Marines being held in Russia pressed for their release ahead of Wednesday’s summit between U.S. President Joe Biden and Russian President Vladimir Putin, who separately opened the door to a possible exchange.

Washington has protested the detention of both Trevor Reed and Paul Whelan, and repeatedly demanded their release. Both Americans have denied the charges against them.

Whelan was convicted in June 2020 of spying and sentenced to 16 years in prison. Reed was sentenced in July 2020 to nine years after being convicted of endangering two Russian police officers while drunk in Moscow and has been a subject of concern following his COVID-19 diagnosis last month.

Asked if he would consider a prisoner swap, Putin told NBC News in an interview that aired on Monday: “Yes, yes of course.” Putin separately on Sunday said Russia would also hand over cyber criminals to the United States if Washington also turned over Russians.

U.S. Secretary of State Antony Blinken, in a separate interview that aired Monday, said Biden would raise the issue with Putin. Blinken added that he has urged his own Russian counterpart to release Whelan and Reed, telling MSNBC: “Their arbitrary, unlawful detention needs to end. They need to come home.”

David Whelan told NBC he was conflicted about a potential exchange, saying his brother was innocent. “We’d rather see the door just open and him come out rather than some sort of negotiated release of Russian convicts,” he said.

Joey and Paula Reed, in interviews on CNN and NBC, said they were hopeful their son could be released soon and that Biden and his administration would keep pressing for both men’s release.

“We’re very happy to hear that President Putin is open to a prisoner exchange,” they told NBC, adding they have had no contact with their son since his coronavirus diagnosis.

They acknowledged other major issues facing the two countries but said a swap could be one tangible outcome from this week’s summit: “This prisoner exchange is the easiest thing that they could do.”

Weeks after Biden took office, Whelan’s lawyer in February told Reuters that Moscow and Washington were discussing a possible swap.

White House spokesperson Jen Psaki last month told reporters such detainments by Russia were being raised “at the highest level, and … through many diplomatic channels.”

Moscow last month said there were no discussions, according to the RIA news agency.