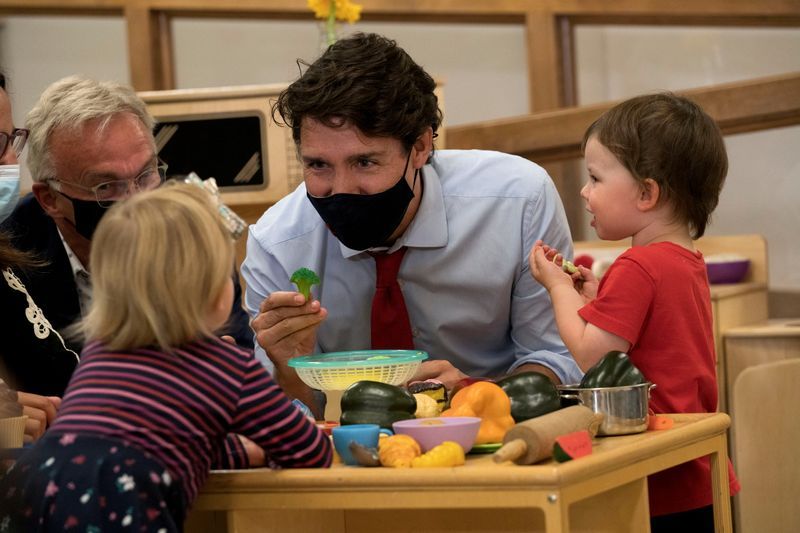 OTTAWA (Reuters) – Canadians will face a stark choice on how to tackle a childcare crisis when they go to the polls on Sept. 20, with the ruling Liberals vowing to push ahead with a subsidized daycare system and the rival Conservatives offering tax credits to parents.

The dire need for affordable, reliable childcare in Canada was laid bare by the coronavirus pandemic, as daycare and school closures forced many parents, mostly women, to cut back work hours or leave jobs to care for children, hurting productivity.

More than 48% of Canadian parents have struggled to find affordable childcare, a recent Statistics Canada study found, prompting 27% of them to delay a return to work and 41% to change work schedules.

Public support for a national childcare program is high, with more than 70% of Canadians in favor, according to an Angus Reid poll. Support is strongest among women and left-leaning Canadians, key voting blocs for the center-left Liberals who are in a neck-and-neck https://graphics.reuters.com/CANADA-ELECTION/POLL/zgvommlbqvd race with the Conservatives.

“What the pandemic served to do was it really just made the challenges of trying to balance childcare with paid work so glaring,” said Morna Ballantyne, executive director of Child Care Now, which advocates for publicly funded childcare. “Women were dropping out of the paid labor force.”

Mothers of young children saw a huge jump in unemployment during the pandemic, and continue to lag their male counterparts in recovering those losses. The labor participation rates for women with children are also far lower than for male parents. Getting those women working is key to Canada’s economic growth, economists say.

Prime Minister Justin Trudeau’s Liberals say their C$30 billion ($23.8 billion) plan to vastly lower daycare fees by ensuring an average cost of C$10-a-day and creating 250,000 new childcare spots over five years will help do that. The Liberal plan is being implemented in seven of the 10 provinces and one of the three Canadian territories.

The Conservatives, out of power since losing a 2015 election, have said that if they win this month’s vote, they will cancel those deals and instead offer payments of up to C$6,000 a year, based on income, to help parents pay for their daycare of choice.

The two main parties’ divergent approaches could make childcare a deciding factor in key electoral ridings, particularly in Vancouver and Toronto, where center-based daycare spots are notoriously hard to find and childcare can cost families thousands of dollars each month.

Kerry Liu, a Toronto-area father whose youngest child will be starting kindergarten this year, said daycare was a huge expense for his family and the Liberals’ plan is definitely a key consideration for him in the election.

The median cost for toddler care for one child in Toronto is C$1,578 a month. That drops to C$210 a month under the Liberal plan compared with C$1,178 a month for a middle-income family under the Conservative plan, according to Reuters’ calculations.

For a graphic on Canada election: daycare costs:

“We’re going to help all parents, all parents, immediately” whether they use public daycare or not, Conservative leader Erin O’Toole said when he launched his election platform last month.

Business groups, which typically are concerned about excessive government spending, prefer the tax-credit approach because subsidized care is more costly.

But Trudeau’s national daycare strategy is “popular across the board” with voters, said Nik Nanos, head of Nanos Research, and could be a wedge issue in tight races, particularly in urban centers where both parents typically work.

“If you’re in downtown Toronto or downtown Vancouver, you want to run against the Conservatives on vaccinations and childcare,” Nanos said, referring to the two main parties’ divergence over mandated COVID-19 vaccinations.

Trudeau, who hopes high COVID-19 vaccination rates and a strong economic rebound will help him win a majority government on Sept. 20, has mandated the shots for federal workers https://www.reuters.com/world/americas/canada-require-vaccines-all-federal-public-servants-2021-08-13 and all his candidates https://www.reuters.com/world/americas/canadas-pandemic-election-unvaccinated-candidates-are-knocking-doors-2021-08-23. O’Toole opposes the mandates.

But the chaotic situation last month in Afghanistan, where Canada struggled to evacuate its citizens, has left Trudeau’s Liberals sagging in the polls and well below the 170 seats needed for a majority in the House of Commons. Canada’s economy also performed worse https://www.reuters.com/business/canadian-economy-shrank-11-q2-july-gdp-seen-down-04-2021-08-31 than expected in the second quarter.

The Liberals, who currently rely on the support of opposition parties to pass legislation, are favored by 31% of voters versus 34% for the Conservatives, according to a new Nanos Research poll. The left-leaning New Democrats, who also support national daycare, are at 20%.

“A tax credit to parents … is not going to address any of those issues,” said Kerry McCuaig, a fellow in early childhood policy at the University of Toronto’s Atkinson Centre.