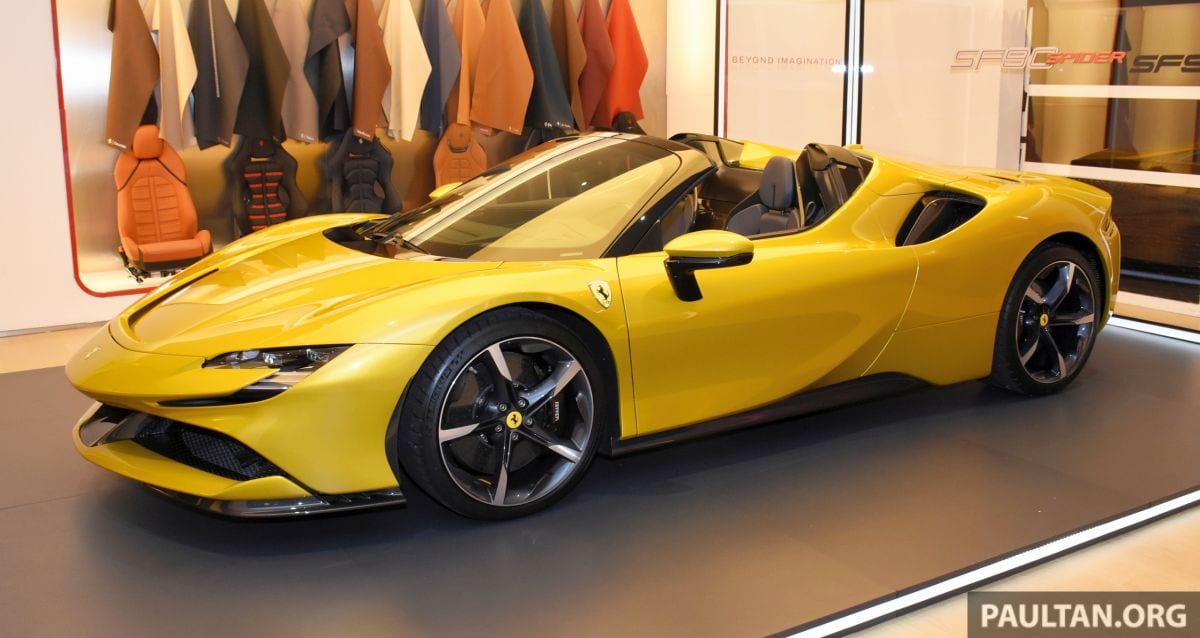 Naza Italia has officially launched the Ferrari SF90 Spider in Malaysia, the car making its debut via a digital presentation earlier this evening. The aperta version of the SF90 Stradale plug-in hybrid goes on sale here priced from RM2,088,000 (before duties, customisation options, taxes and insurance), which makes it nearly RM200k more than the coupe.

The F173A is essentially the same car as its hard-top sibling from a technical viewpoint, but the open-top route has obviously brought about some styling and technical revisions, primarily with the exterior. There are also dimensional changes, but these are so minor that they are unnoticeable – at 4,704 mm long, 1,973 mm wide and 1,191 mm tall, the Spider is slightly shorter (-6mm), a whisker wider (+1mm) and marginally taller (+5mm) than the coupe.

Design-wise, the fidelity to the coupe’s front end has been retained, and the modifications come from the windscreen onward. The cockpit has been shifted forward in the Spider, the windscreen has an increased rake and the A-pillars have been reprofiled, effectively made more slender, while the roof has been lowered by 20 mm. As for the car’s retractable hard top (RHT), the aluminium unit can be deployed or stowed in just 14 seconds, and is operable on the move at up to 45 km/h. Of note is its footprint of the unit, which takes up just 100 litres of space despite having to store the bulk of the entire assembly.

The roof has of course necessitated changes and tweaks elsewhere.The shark-fin antenna has been relocated. On the Stradale, the unit is mounted on the roof, but for the Spider now sits further behind. Elsewhere, the two section, rear shut-off Gurney active control system from the Stradale has also been changed on the Spider, as has heat management coming off the engine bay.

Because the RHT compartment sits over the engine bay, its placement means the functioning of the vents as seen on the SF90 Stradale, which are located immediately behind the roof, would be impeded. Transverse louvres have now been inserted in the SF90 Spider’s rear screen, acting as an ‘chimney’ to evacuate hot air without interfering with the car’s aerodynamics at speed.

The SF90 Spider features two aerodynamic elements in the cockpit to minimise aerodynamic turbulence and wind noise with the top down. The first is a central trim section between the driver and passenger seats, which channels the air flow away from the head and shoulders into the second element, a double layer of trim on the upper part of the tunnel. Additionally, to enhance the aural soundtrack from the engine, a resonator tube has been added to channel sound from the exhaust into the cockpit.

The Spider’s hybrid powertrain is identical to that seen on the Stradale, combining a turbocharged V8 engine integrated with three electric motors, two of which are independent and located on a RAC-e electric front axle, with a third MGUK (Motor Generator Unit, Kinetic) unit housed between the engine and the gearbox at the rear. Also present, the F1 eight-speed, wet dual-clutch transmission that debuted on the hard-top.

An SK Innovations lithium-ion 7.9 kWh battery pack, which is housed behind the seats, provides the Spider with a 25 km all-electric operating range, with pure electric operation – available up to 135 km/h – utilising just the two independent motors on the front axle. As it is with the Stradale, it takes about three hours to charge the battery via the plug-in route.

Four drive modes are available, selected via the eManettino controller. The first is eDrive, which provides all-electric operation, followed by Hybrid, which is the default setting when the car is turned on. The third mode is Performance, which keeps the engine running and prioritises charging the battery than on efficiency, and finally, Qualify prioritises performance over battery charging and provides maximum power output by allowing the electric motors to work at their maximum output.

Inside, the Spider’s cabin is familiar ground, mirroring the Stradale’s. Kit includes a fully-configurable 16-inch curved high-definition digital instrument screen, a steering wheel with a touchpad and an assortment of haptic buttons, a head-up display, a new navigation system, a retro-styled digital gearshift grille and a new ignition key.

As it is with the Stradale, an optional Assetto Fiorano pack is available for the SF90 Spider. The specification contains pretty much the same elements seen on the coupe, in this case a two-tone livery, carbon-fibre door panels and underbody as well as titanium springs and exhaust. There’s also a carbon-fibre rear spoiler, GT racing-derived Multimatic shock absorbers optimised for track use and softer compound, road-homologated Michelin Pilot Sport Cup2 tyres.

The launch example, a Giallo Monte Carlo yellow left-hand drive unit, gets plenty of carbon-fibre accoutrements, as can be seen in the photos. Exterior bits featuring the material include the front spoiler, rear diffuser, side air splitters, underdoor cover and engine bay covers, while the stuff can be found inside on the steering wheel, dash inserts, upper centre console trim, rear shelf, door panels as well as on the racing seats.

Unfortunately, the unit won’t be available for public preview, because it is already heading out of the country to its next destination. The car was due to be shown over course of the last week, but its arrival days before the full movement control order (FMCO) kicked in put paid to that. All the launch materials, including our own photos, were taken just prior to the FMCO.

As is the case with the SF90 Stradale, it’ll be a while before Malaysian buyers get their hands on the Spider.
Those for the coupe are still pending due to delays brought about last year by the Covid-19 pandemic, and it will be more than a year before the first customer cars get here.

Sandakan district to allow dine-ins despite uncertainties in SOPs

Food waste problem even bigger than we thought

Football: Soccer-Half a century of England hurt could be healing