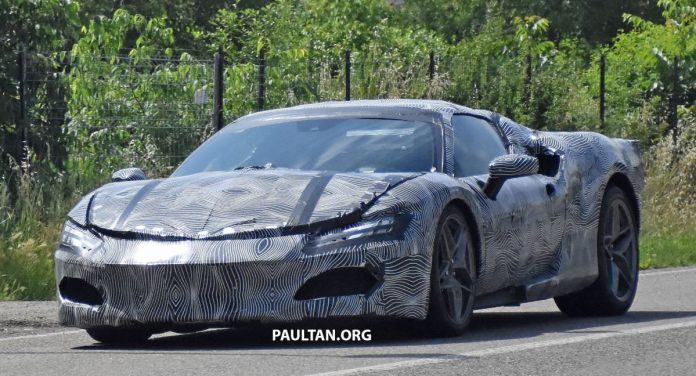 Ferrari has dropped a teaser video for what it calls a “new revolutionary prancing horse sports car,” which will make its official debut on June 24 this year. The 59-second clip doesn’t provide much in the way of details, although we get to hear Ferrari Driver Academy Esports driver and 2019 F1 Pro Series world champion David Tonizza share his emotions in anticipation of the launch.

While the Italian carmaker isn’t willing to describe what it has planned, rumours suggest it will be a new entry-level Ferrari model we will see next week. The company previously announced plans to increase its product offerings to draw in more customers, and the upcoming sports car (codenamed F171) will help to attract customers who are considering a McLaren Artura or even a Porsche 911.

Previous reports also indicate the F171 will feature an electrified powertrain, which consists of a new 3.0 litre twin-turbo V6 that is augmented by an electric motor to provide 710 PS (700 hp). There’s also talk of plug-in hybrid technology being utilised instead of a conventional hybrid, much like the SF90 Stradale.

Given the use of a V6 engine, this would be the first time a V6-powered, road-going “Ferrari” will be made available since the Dino, although that classic model did not actually wear the “Cavallino Rampante.” As a bit of trivia, Enzo Ferrari chose to make Dino a sub-brand within Ferrari, and the name honours his son, Alfredo “Dino” Ferrari, who was credited with designing the V6 engine used in the marque’s racing cars.

While the “Dino” name has been linked with the F171 project, we’ll have to wait until June 24 to see if the company decides to use it. Spyshots of prototypes don’t provide a good picture of what the production version will look like, although there are hints of the SF90 in the design.

Other Sports: Taekwondo-Putin stripped of black belt over Ukraine invasion