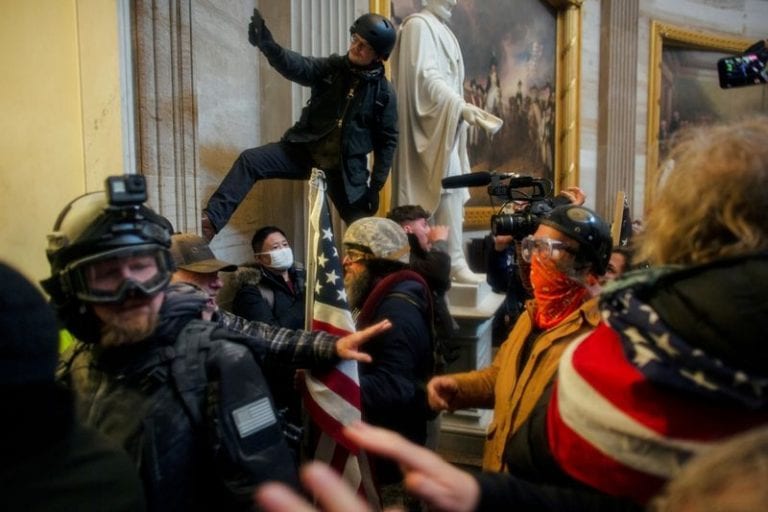 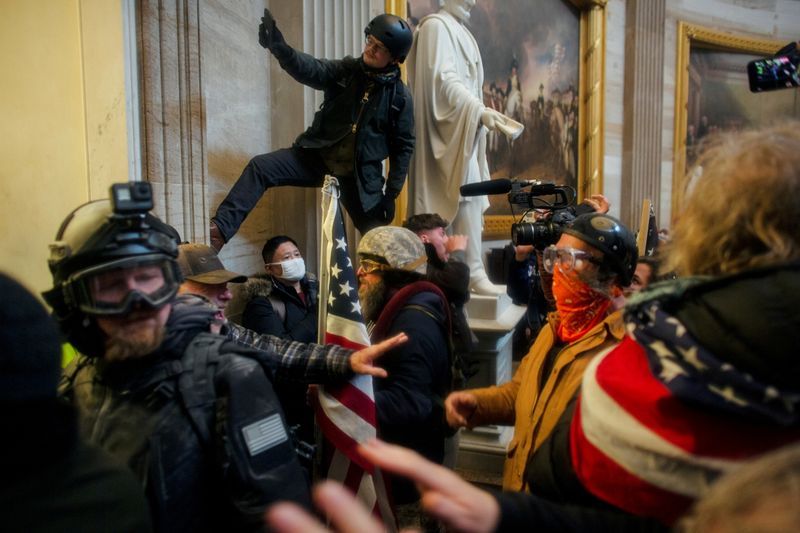 WASHINGTON (Reuters) – Nearly four months after the U.S. Capitol attack, just one of more than 440 people charged has pleaded guilty, a sign of tough conditions set by prosecutors for plea deals and resistance by defense lawyers to their demands.

This reflects the high stakes of cases stemming from the worst violence at the Capitol in modern history, which left five people dead.

U.S. officials have suggested in court hearings that defendants might be interested in pleading guilty, a move that typically can result in a shorter sentence. Prosecutors routinely seek to resolve cases through plea bargains. But legal experts said it is relatively early in this process for either prosecutors or defense lawyers to be reaching quick deals.

Lawyers for more than a dozen defendants said plea talks so far have foundered because prosecutors demanded their clients turn over social media data, cell phones and other evidence, while also pushing for prison sentences they would not accept.

Without plea deals, hundreds of separate trials will move forward, a time-consuming process now extended by a case backlog resulting from the COVID-19 pandemic.

Moreover, without evidence provided under plea bargains, federal prosecutors may have a harder time building cases against leaders of the violence on more serious charges such as conspiracy or violation of laws intended to fight organized crime.

The Justice Department has launched a massive investigation into the Jan. 6 attack on the U.S. Capitol, when hundreds of supporters of Donald Trump stormed the building after the then-president falsely claimed in a fiery speech that the election had been stolen from him. The mob smashed windows, fought with police and sent lawmakers into hiding.

Many participants also live-streamed their actions on social media or posted pictures afterwards of themselves, making it relatively easy for law enforcement agencies to make hundreds of arrests rapidly.

The charges have ranged widely, from disorderly conduct to assaulting officers and conspiracy.

Key conspiracy cases have largely focused on leaders of the right-wing Oath Keepers and Proud Boys groups. They face charges of obstruction of an official proceeding, destruction of government property and occupying a restricted building.

Some defendants facing lesser charges have been surprised by prosecutors’ demands. Defense lawyers have complained that their insistence on obtaining cell phones and other physical and digital evidence is excessive. That data could be used to build cases against planners of the violence.

Attorney Steven Metcalf said he rejected a plea deal that would have sent his client Richard Barnett to prison for several years. The man from Gravette, Arkansas was seen in a widely circulated photograph sitting at a desk with his feet up in House of Representatives Speaker Nancy Pelosi’s office.

Former federal prosecutor Laurie Levenson, a law professor at Loyola Law School in Los Angeles, said that by taking a tough stand in plea-bargain negotiations, prosecutors are “sending a message” about how seriously they take the riot cases.

“It is still relatively early in the process,” Levenson said. “Prosecutors don’t want to … set the standards too low. There’s not a lot incentive for prosecutors to give a sweetheart deal.”

Prosecutors are also likely focused on amassing as much evidence as they can, she said, hence the requests for defendants to surrender phones and other data.

The one person who has pleaded guilty so far, Oath Keepers founding member Jon Schaffer, agreed to turn over “any and all evidence” of crimes that he was aware of and to fully cooperate with prosecutors, according to his plea deal filed in federal court.

The lawyer for Jacob Chansley, the man nicknamed the “QAnon Shaman” who was photographed wearing a horned headdress inside the Capitol, said the prosecutors he has talked to appear to have less leeway to negotiate deals without consulting Washington than he normally encounters in federal cases.

“We have been working as collaboratively as we can with the government,” said Albert Watkins, a St. Louis lawyer who represents Chansley and three other Jan. 6 defendants.

A Justice Department spokesman would not comment on possible plea deals or whether senior officials have slowed efforts by frontline prosecutors to strike deals.

At a court hearing this month, prosecutors indicated that senior officials had approved possible plea deal offers for four defendants charged with attacking police in a Capitol tunnel with firecrackers and chemicals.

But lawyers for some of them said no offers have materialized.

“While it is true that the government indicated that they are ‘in the process of extending plea offers in our case,’ there have been no discussions regarding same or an intention of entertaining same,” said Carlos Diaz-Cobo, who represents Quaglin of New Jersey.

“Our intention, at this point, is to go to trial,” Diaz-Cobo added.

Plea discussions appear to be advanced in the case of at least one other accused rioter, court records showed. Douglas Jensen of Des Moines, Iowa, faces charges including violent entry of the Capitol and disrupting government business. Court records showed that a conference in early May was postponed until June while the parties decide if they want to proceed with a plea. Jensen’s lawyer declined to comment.