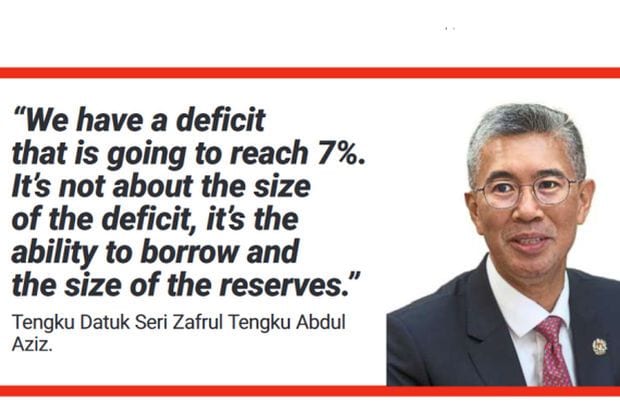 “Malaysia’s rating affirmation is a testimony of the economy’s resilience amid an uncertain landscape, with good medium-term growth prospects and stable current account surplus supported by a diversified market and export offerings.

“Malaysia has consistently registered a current account surplus over the past two decades with its largest ever trade surplus of RM184.8bil in 2020, equivalent to 4.2% of the gross domestic product (GDP),” Tengku Zafrul said in a statement yesterday.

The rating agency said the rating is premised upon prospects for strong and broad-based medium-term growth and persistent current account surpluses with a highly diversified export base. It is balanced also with the high public debt, a low government revenue base and lingering political uncertainty, according to Fitch Ratings.

Commenting further, Tengku Zafrul said the country has also announced the National Recovery Plan (NRP) – a dynamic, flexible and forward-looking strategy that is guided by data and science.

“Premised on a whole-of-nation approach, the government will seek cooperation from industry experts, non-governmental organisations, community leaders and the general public in implementing the NRP,” he said.

“The NRP’s systematic approach is expected to strike a good balance between protecting lives, and safeguarding livelihood. Notably, since the NRP’s implementation on June 1, 2021, eight out of 14 states in Malaysia have recorded a significant decline in new cases, allowing them to shift to phase two over the past week, where more economic sectors and social activities are allowed under strict compliance to standard operating procedures,” he added.

He also said that the country’s key to an eventual economic recovery hinges upon a successful vaccination programme.

“The National Covid-19 Immunisation Programme (PICK) continues to be ramped up to hasten economic recovery. Malaysia is currently one of the fastest nations in the world to administer vaccinations, with more than 400,000 doses daily.

“PICK is expected to boost the vaccination rate to 500,000 doses daily, while also aiming for 100% of the adult population in Selangor and Kuala Lumpur to be given at least one dose of the vaccine by Aug 1 under Operation Surge Capacity,” he said.

“Based on this fast-tracked approach, 100% of the adult population are expected to be fully inoculated by end-Oct 2021,” he noted.

Tengku Zafrul also pointed out that there would be other factors that will drive Malaysia’s economic recovery include improving external demand from major trading partners, and the implementation of infrastructure projects with high multiplier impact.

“Other supporting factors include Malaysia’s economic fundamentals, as well as its depth and breadth, enabling it to remain resilient even during difficult times. Notably, Fitch has acknowledged that Malaysia’s manufacturing sector and exports will continue to benefit from thriving global demand for the country’s products like electrical and electronics, crude oil and personal protective equipment,” he said.

Meanwhile, Bernama reported Tengku Zafrul, in an interview with South China Morning Post, as saying that Malaysia’s fiscal deficit is expected to go up to between 6.5% and 7% of its GDP this year from the 6% targeted earlier, after factoring in the recent stimulus packages announced by the government.

He said the government is ready to expand fiscal space whenever necessary to support the economy and the people.

“Although Malaysia is A-rated, in terms of our fiscal reserves, we are smaller than many other A-rated countries.

“The only difference is that we have strong growth prospects,” Tengku Zafrul added in that interview.

Personal Firewalls Explained and The 5 Best Ones for 2020