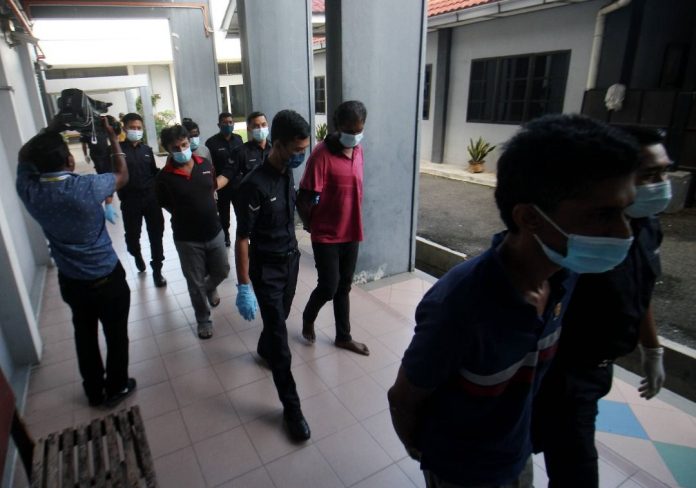 IPOH (Bernama): Five men were charged in the Magistrate’s Court here on Friday (June 11) with the murder of a man whose body was found floating in Sungai Kinta, Pasir Puteh on May 26.

However, no plea was recorded from the accused aged between 26 and 40 after the charge was read out to them before Magistrate Nur Melati Diana Abd Wahab as the case comes under the jurisdiction of the High Court.

The charge was framed under Section 302 of the Penal Code read together with Section 34 of the same law, which carries the mandatory death sentence upon conviction.

Jeyenthiran, Simeon, Basharuddin and Selvamani were also charged with kidnapping Preshna in order to murder him, an offence under Section 364 of the Penal Code read together with Section 34 of the same code which provides a death sentence or maximum 30 years’ jail and whipping if convicted.

They allegedly committed the offence at an abandoned building here at 7.30 am on the same day.

The prosecution was conducted by deputy public prosecutor K.Darinee while the accused were represented by lawyer K. Nahtan and Charan Singh and the court set August 4 for mention.

Meanwhile, Ipoh district police chief ACP A.Asmadi Abdul Aziz in a statement today, said the police are tracking down two individuals to assist in the investigation into the murder case.

Football: Analysis-Soccer-Alaba quality bails out Austria but raises questions about his best role

Upsides in store for Bursa in event of early election

Karnataka: 'Wearing hijab is my right and you can't take it away'