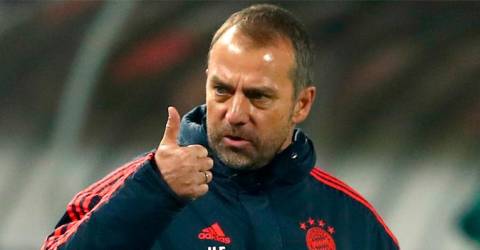 “In our games over the last 10 months we’ve always tried to impose our style on the opposition,” Flick said Saturday with treble-chasing Bayern on a 20-match winning run.

“We’ve always played with a high line and ultimately we’ve got results doing that so we won’t change too much.

“We don’t want to give too much space to the opposition.

“What’s important is we can press the opposition when we are in possession and make sure we cover the ground,” he added, should PSG’s forwards breach his defence.

Bayern have powered into the Lisbon final by scoring 42 goals in 10 European matches.

However, they nearly came unstuck early in Wednesday’s semifinal against Lyon as the French side found plenty of space to attack behind Bayern’s back four.

Joshua Kimmich is tipped to switch from midfield to rightback, potentially tasked with keeping Neymar and Mbappe away from Bayern’s goal.

“We don’t know the starting eleven, but I think I’m going to play rightback,” said Kimmich, who played in central midfield in the 3-0 win against Lyon.

“It might be Neymar and Mbappe on the right – they are very good going forward, but I don’t think we are going to sit too deep.”

Jerome Boateng, one of four survivors from the Bayern team which won the 2013 Champions League final, strained a hamstring against Lyon.

“I hope Jerome will be fit. After training we will debate how to go forward,” said Flick.

He hinted at changes to his starting line-up after substitutes Philippe Coutinho and Kingsley Coman impressed against Lyon.

“When they came off the bench, Kingsley and Philippe showed they can strengthen the side,” said Flick.

“It’s our third game in quick succession so we need to look at the players’ fitness levels.”

Having won the Bundesliga and lifted the German Cup, Bayern are chasing the treble in Flick’s first season.

Bayern shook up European football with a stunning 8-2 demolition of Spanish giants Barcelona in the quarterfinals and are in confident mood for Sunday’s final.