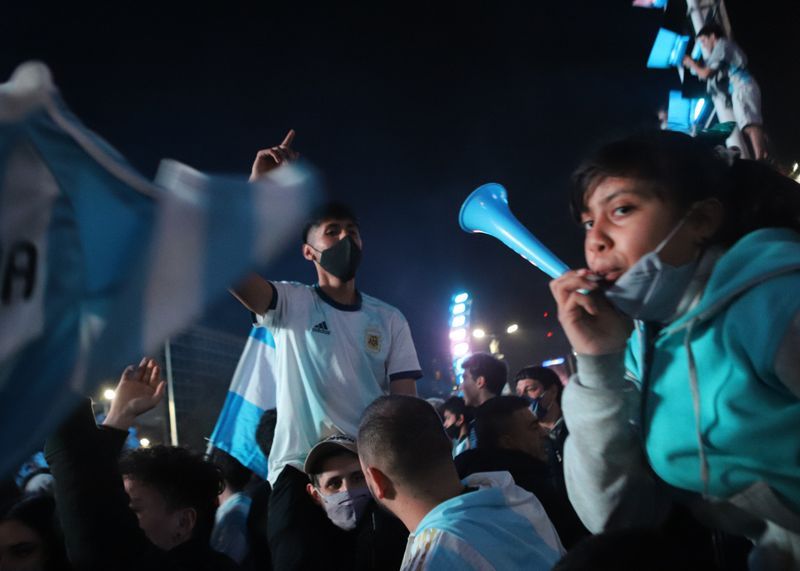 (Reuters) – Argentina’s first major title in 28 years sent the nation into a frenzy of celebrations on Sunday with the Copa America victory over arch-rivals Brazil instilling hope they may once again rise to be serious World Cup contenders.

Argentina beat Brazil 1-0 at the Maracana stadium in Rio de Janeiro on Saturday night to claim their first Copa since 1993 and give captain Lionel Messi a long-coveted first medal for the national team to join his multiple accolades with Barcelona.

It was a hard-fought match, with 41 fouls, nine yellow cards, and Argentina spending much of the second half defending their first half lead from Angel Di Maria’s goal.

Yet the details were unimportant to the hundreds of thousands of people celebrating across Argentina. All that mattered was the long and painful drought was over.

“I had been very close (to winning a title) for many years. I knew that it was going to come right at some point, and I think there is no better moment than this,” said a jubilant Messi, who had been desperate to emulate World Cup winner Diego Maradona’s international success with Argentina.

“We are still not aware of what we did, but it will be a match that will remain in history not only for being champions of America, but also for beating Brazil in Brazil,” added Messi, who was joint player of the tournament.

Messi will be 35 when next year’s World Cup kicks off in Qatar. But he is surrounded by younger players, with Rodrigo De Paul outstanding in the final and others such as defender Christian Romero, marksman Lautaro Martinez and goalkeeper Emiliano Martinez at the start of their international careers.

Whether Argentina have what it takes to challenge outside Latin America and win a third World Cup is an open question.

They have been effective but unspectacular in the qualifiers and trail leaders Brazil by six points after six games.

How they might fare against major European nations is an incognito. South American sides have found it almost impossible to test themselves against top European countries over the last few years as the Nations League has squeezed the timetable.

Tostao, a Brazilian former World Cup winner, said Argentina had progressed since the 2018 World Cup – where eventual winners France eliminated them 4-3 in the last 16 – on both an individual and collective level.

But Brazil were still stronger, even despite the Copa loss, he added. “Brazil are at the level of the strong European sides. Argentina need to improve a bit to get to the same level as Brazil and have chances of winning the World Cup.”

The gap in quality between the Euros and the Copa America was evident over the last four weeks, with the South American game noticeably slower, more truncated – and dirty.

Argentina committed more fouls than any other team bar Colombia, according to statistics in the Spanish newspaper AS.

Countering the euphoria in Argentina, Brazil coach Tite criticized their gameplan in the final, saying they set out to play “anti-football” based on fouls and time-wasting.

But there was no dampening the mood in Argentina.

As he watched scenes of fans mobbing the team coach as it arrived home, one TV presenter summed up the national mood: “We are champions, we are euphoric and we’re enjoying it.”