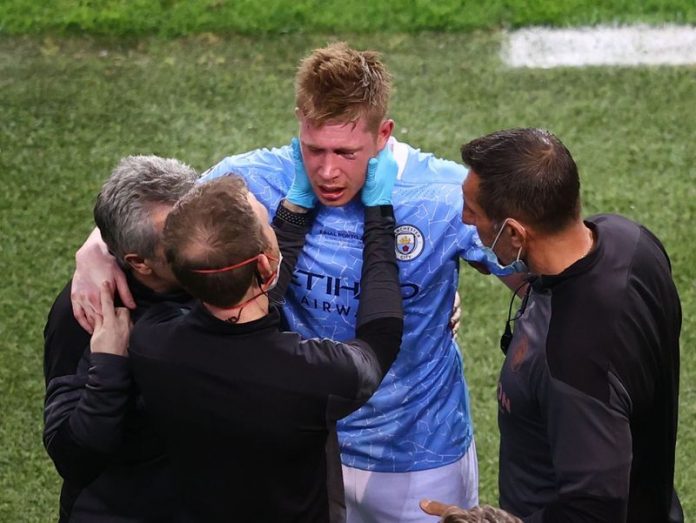 (Reuters) – Kevin de Bruyne has had minor surgery on the eye socket he injured in the Champions League final and will join the Belgium squad on Monday as they complete their preparations for the Euro 2020 tournament.

There had been fears that key midfielder De Bruyne could miss part or all of the finals, but Belgium coach Roberto Martinez says the surgery he required was only a “small intervention”.

“It went very well, very positively. We are looking forward to Monday when he will join our squad,” Martinez told reporters on Saturday.

“That small intervention was necessary with a view to the long term. He will not need a long recovery.

“The operation only took 20 minutes. The medical staff is satisfied with the result. De Bruyne is now doing well, that’s all.”

De Bruyne fractured his nose and a bone around his left eye socket in last Saturday’s Champions League final playing for Manchester City in their 1-0 defeat by Chelsea.

The recovery of the 29-year-old will be a huge relief for Martinez as he attempts to steer Belgium, who are ranked the number one team in the world, to a first European title.

They open their campaign next Saturday against Russia in St Petersburg and will also play Denmark and Finland in their pool.

Before that, they take on Croatia in a final warm-up fixture on Sunday, having been held 1-1 by Greece in their previous friendly.

“We have to show that we have taken a step forward in the preparation,” Martinez added. “We are facing a strong team, with a lot of experience and technical qualities in midfield.

“We are going to have to be sharp and concentrated. It is a test for the group stage of the European Championship, and this is a match we need.”

Washington in talks over removal of foreign fighters from Libya – U.S. envoy