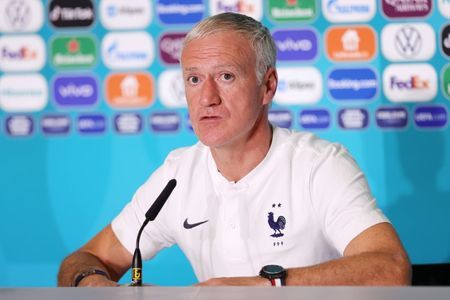 MUNICH, Germany (Reuters) – France coach Didier Deschamps said it is not just his own side’s attacking threat that can cause problems as he prepares to take on Germany in the European Championship in Munich on Tuesday.

Much has been made of the firepower Deschamps has at his disposal ahead of France’s tournament opener against Germany, with Real Madrid’s Karim Benzema back in the squad and set to line up alongside Kylian Mbappe and Antoine Griezmann in attack.

But the France coach, who is looking to become the first person ever to win the World Cup and European Championships as player and manager this summer, said Germany have plenty of attacking options to worry his side’s defence, too.

“There is individual quality in each position but the players can play in very different positions, they can be flexible, which is difficult to play against,” Deschamps told a news conference on Monday.

“There are players like (Timo) Werner or (Leroy) Sane who have a very different playing style and tomorrow we will see who is playing in attack for Germany.

“Their attackers are important for the German team, and we have to try stop them having an impact on the game and how successful we are depends how we move and are positioned on the pitch.”

France made an unconvincing start to the 2018 World Cup before going on to win the tournament, struggling past Australia with a nervy 2-1 victory in their opening group match.

Deschamps insisted that performance mattered little given the final outcome, and played down the significance of putting in a strong showing in the group opener.

“The reality is that the first match is important but it is not decisive, both teams have two more matches after this,” Deschamps added.

“The quality of our opponent we face tomorrow turns the match into a fantastic encounter. We are two of the best teams in Europe, it is all about who can be clinical and take chances.”

Speaking at the same news conference, France captain Hugo Lloris revealed his anguish at hearing former Tottenham Hotspur team mate Christian Eriksen had collapsed following a cardiac arrest on the pitch on Saturday, before being taken to hospital.

“We received information after training and we were worried, and stressed out,” Lloris said. “And then we got the note that he felt better.

“These are pictures that you don’t want to see. But you have to praise how the players reacted, how the fans reacted in a delicate situation. We have to say thank you to all those who helped him.”

Shamima Begum trafficked by IS to Syria for sexual exploitation, tribunal hears

WhatsApp working on feature to decrease size of chat backups