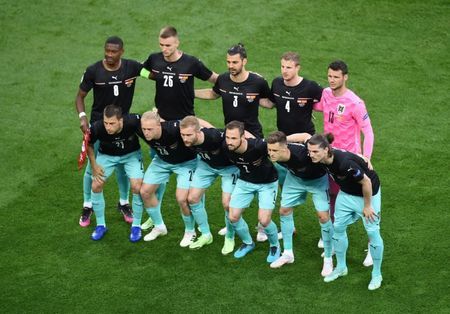 AMSTERDAM (Reuters) – Austria and the Netherlands both broke through barriers in getting their European Championship campaigns off to winning starts and will be looking for more of the same when they meet in Amsterdam on Thursday.

Austria’s 3-1 victory over North Macedonia in Bucharest on Sunday was their first ever at the European Championship while the Dutch marked their return to a major tournament for the first time in seven years with a dramatic 3-2 win over Ukraine.

Another home game at the Johan Cruyff Arena gives the Netherlands an advantage although they will need to tighten up in defence to avoid a repeat of Sunday’s Group C game in which they let slip a two-goal lead before being rescued by Denzel Dumfries’s 85th-minute winner.

“Conceding two goals like that is not something you want to see but we were dominant and that is what we wanted,” said coach Frank de Boer.

“The first step to the next phase has been taken, but we don’t get anything for free.”

Austria will be looking to build on their maiden success but aware the Netherlands will be a much tougher proposition than rookies North Macedonia.

“One thing is clear. We still need points to qualify for the round of 16,” said coach Franco Foda.

They are likely to make changes in attack, even though the three goals in Bucharest was more than in all their previous six European Championship appearances.

Marko Arnautovic and Michael Gregoritsch should start after coming off the bench to seal Sunday’s win.

“They brought a new impulse came into the team,” said Foda. Arnautovic was not pleased with his role as a substitute but had only been back in training for a few days after recovering from a thigh injury.

“When Marko is in top shape, he always plays for me from the start,” Foda said. “But you always have to be careful after a muscle injury

“Marko is a very important part of our team and it is quite possible that he will play against Holland from the start.”

The Dutch are not likely to make any changes as they stick with a 5-3-2 formation which had been the subject of much debate in the country before the Ukraine match.

The strong performances of wing backs Dumfries and Patrick van Aanholt against Ukraine, however, may have quelled the dissent.

Some Parents Want Schools to Reopen as the Pandemic Drags On

Jail for SG monetary analyst who took upskirt movies and had almost 500 voyeuristic...