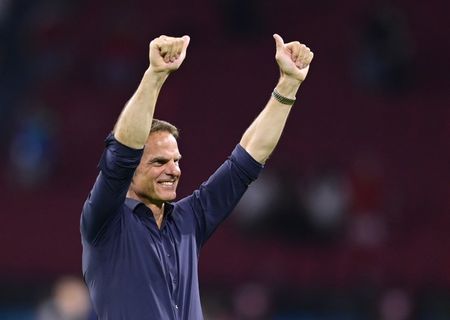 AMSTERDAM (Reuters) – The Netherlands still have room to improve despite sealing a place in the knockout stages of Euro 2020 with a game to spare, coach Frank de Boer said after his side’s 2-0 victory against Austria on Thursday.

The win ensured that the Dutch would finish top of Group C. The Dutch had beaten Ukraine in their opening match of the tournament.

“Overall I am happy with our performance. But we could have done a lot better in possession”, De Boer told a news conference.

“We improved defensively, we didn’t give away as many chances as against Ukraine. But it was frustrating how quickly we lost the ball on many occasions. We can do a lot better, but that’s good, you don’t want to peak too early.”

The Dutch coach said he was not sure how many players would be rested for their final group match against North Macedonia on Monday, which is essentially a dead rubber as their opponents cannot progress into the next round.

“We will see who needs rest, and who wants to stay in the rhythm of playing,” De Boer said. “Having five substitutions at hand certainly creates a lot of options.”

His captain Georginio Wijnaldum has warned against complacency now that the first hurdle has been cleared.

“It’s a bit of luxury to be through already, but we need to be aware of the temptation to relax. We have to stay focused, this team needs to work hard to get a result,” he said.