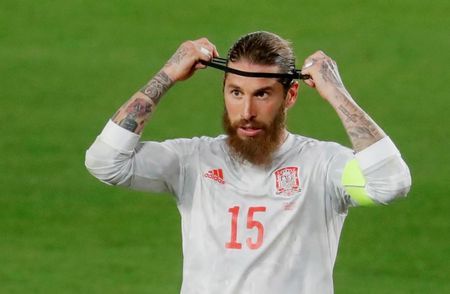 MADRID (Reuters) – Sergio Ramos burst into tears as he said farewell to Real Madrid on Thursday after 16 years at the club in which he became one of their most iconic players and lifted 22 trophies.

Ramos, who made 671 appearances for Real and scored 101 goals including netting in two Champions League finals, ran down his contract with the 13-times European champions and was unable to agree a new deal with the club.

“One of the most difficult moments in my life has arrived, you are never prepared to say goodbye to Real Madrid but the time has come,” Ramos said before bursting into tears in a farewell ceremony at the club’s Valdebebas training ground.

“A marvellous, unique era has come to an end but an exciting new future has opened to me and I’m very keen to demonstrate I can play at the top level for a few more years and add a couple more trophies to my list of honours.”

Club president Florentino Perez, who brought Ramos to Real from Sevilla in 2005 for 27 million euros ($32 million), a then record fee for a Spanish defender, thanked the player for “making Real Madrid’s legend even greater and ensuring it is the most admired club in the world”.

“It’s not an easy day because you’ve been really special to me and you and I have lived and suffered through historic moments for Real Madrid,” Perez added.

Petron returns to the black in 2Q with RM42mil net profit

Most areas in England to see 5% council tax rise