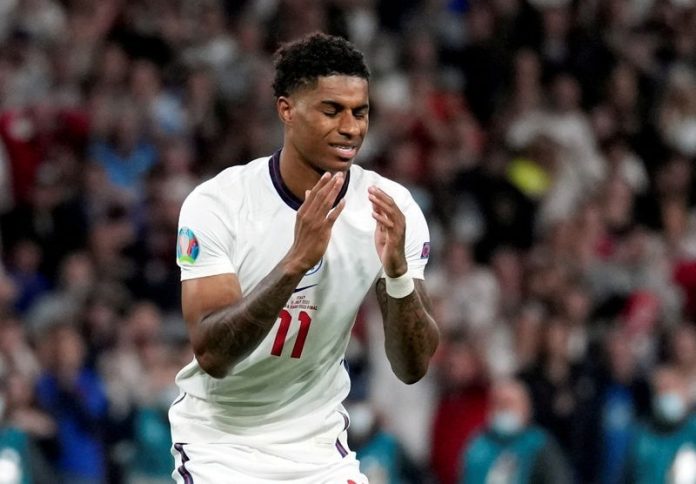 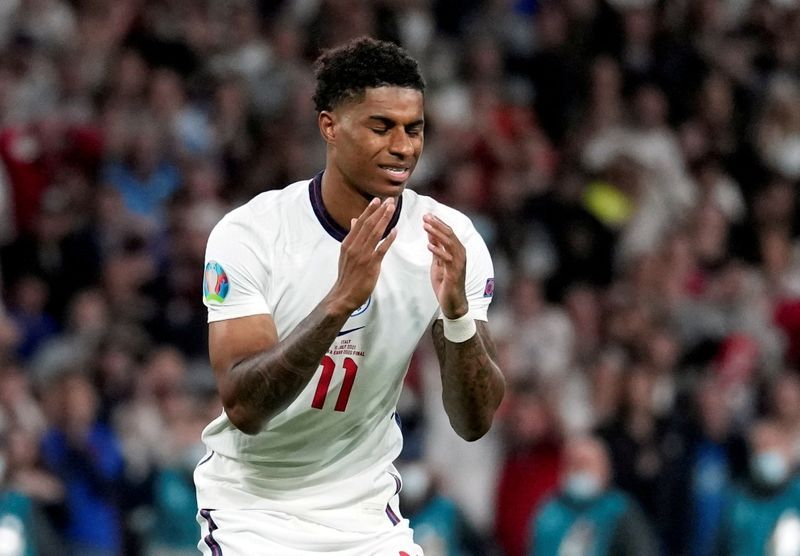 MANCHESTER, England (Reuters) – The online racial abuse of English footballers led UK Prime Minister Boris Johnson to meet with social media companies on Tuesday, but while the focus is on the industry taking action, experts have warned the global nature of the problem makes it difficult to take legal steps against the perpetrators.

Experts in the field of online abuse point to the problem of fake accounts, while an online threat and intelligence specialist said there is a potential risk of a strategic, targeted campaign designed to damage the United Kingdom’s social cohesion and reputation.

Twitter and Instagram have declined to discuss the location of those accounts they have banned in relation to the fallout from Sunday’s Euro 2020 final, following which three Black England players, who missed penalties in their shootout defeat to Italy, received online racist abuse.

But data from previous monitoring by various bodies indicates that many attacks come from outside the UK.

The Premier League’s data from their monitoring of abuse against players has shown that around 70% of cases involve abuse coming from social media users outside of the United Kingdom, a league source told Reuters on Tuesday.

On Monday, England manager Gareth Southgate had noted that aspect, when condemning the abuse aimed at Marcus Rashford, Jadon Sancho and Bukayo Saka.

“For some of them to be abused is unforgivable really. I know a lot of that has come from abroad, people who track these things are able to explain that, but not all of it,” he said.

There is evidence that racial abuse of footballers on social media is taking place across the world.

The Fare network, who monitor and campaign against racism and discrimination in football, commissioned a study into last August’s Champions League and Europa League games, involving European clubs, including English teams Manchester United and Manchester City.

“The abuse is global, with accounts from Indonesia to Argentina levelling racism and homophobia at players. The biggest number of discriminatory posts appeared in French and Spanish, followed by English,” the report found.

With online trolls and abusers based around the world, it is tricky for the Football Association (FA) and other bodies to target them for legal action.

“It makes it increasingly difficult because the challenge is that, even if you do get into a position where you do want to use law enforcement and pursue something further, you have got cross-country laws and rules and regulations and different legislation,” Edleen John, the FA’s Director of International Relations, Corporate Affairs and Co-Partner for Equality, Diversity and Inclusion, told Reuters.

Adding to the complexity, says John, is the fact that some users conceal their true location and IP address, by using proxy servers and VPNs.

“That has been a consistent and ongoing challenge in trying to cross down some of the abusers,” she said.

Premier League clubs such as Manchester United regularly have to deal with abusive messages sent to their players online and since Sunday have reported over 50 social media accounts to the platforms, police and the Premier League.

Some experts in online abuse also examine the use of anonymous accounts, automated accounts, known as ‘bots’ and accounts designed simply to stir up trouble — or ‘trolls’.

“We looked at the three players, there were some fake accounts, inauthentic accounts but… it would take days for us to weed through to really see what is real and what are accounts that are just out there to cause trouble,” he told Reuters, adding that they did not find evidence of a coordinated campaign against the players.

Philip Grindell, CEO of Defuse, a threat and intelligence consultancy that works with prominent people subjected to targeted harm, said that as well as taking concrete action to identify and prosecute offenders, the authorities needed to consider that some of the abuse may be coordinated.

“It is important to be mindful of the potential of a strategic targeted use of social media to undermine the UK both with regards to social cohesion and to harm the UK’s reputation and economic opportunities,” he said.

The Premier League was, last month, successful in securing the prosecution of a 19-year-old man in Singapore after he abused Brighton and Hove Albion forward Neal Maupay, the first time the league has obtained such a conviction outside of the UK.

Twitter said in a statement on Monday that it had removed over 1000 tweets and permanently suspended a number of accounts for violating their rules, in the aftermath of the Euro 2020 final.

Facebook, which also owns Instagram, said they had also removed comments and accounts abusing the England players and would continue to do so.

The platform said it has a tool ‘Hidden Words’ which “means no one has to see abuse in their comments or DMs”.

Football authorities and campaigners have been urging the social media companies to take action to stop the abuse being published in the first place.

“These are multi-billion dollar organisations with significant resources and technological capabilities and so the challenge is surely they should be able to channel those resources… to be able to act even quicker than they are acting at the minute,” said the FA’s John.