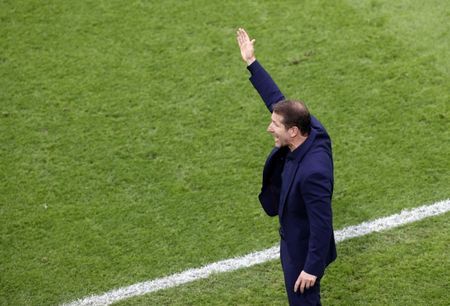 AMSTERDAM (Reuters) – Austria coach Franco Foda said his side were not brave enough to take the game to hosts Netherlands as they meekly slipped to a 2-0 defeat in their European Championship Group C encounter on Thursday.

Austria must now beat the Ukraine in their final pool game in Bucharest on Monday to ensure they advance to the last-16, or else they face an anxious wait to see if they are among the four best third-placed teams that go through to the knockout stages.

Foda’s players rarely took the game to the Dutch, and aside from a few half-chances battled to create anything in their opponent’s box.

“We weren’t brave enough,” he told reporters. “We gave away too many balls too easily and invited them to go on the counter-attack. We created a few opportunities ourselves but were not clinical enough to finish them.

“We tried to play around and down the wings instead of penetrating the penalty-box. But the opponent played very well, they were always compact and defended well.

“Either we didn’t cross or we didn’t shoot. We weren’t determined enough, we lacked purpose. It wasn’t enough going forward.”

Foda felt his side needed to take more care of the ball when they were in possession. He was buoyed by an improved second half display, though the fact Austria managed just a single shot on target the whole game illustrated their struggles.

“The Dutch team had good transitions and there were some weaknesses in our defensive play,” he said. “Every lost ball we gave away hurt, but after their second goal we still gave everything, though I must say we were also fortunate they did not score a third.

“We wanted to achieve more, but we played against a top team with very good strikers. We tried everything.”

NTU scientists develop robots the size of a rice grain that may help in...

‘Belle’ review: A dazzling ‘Beauty And The Beast’ anime