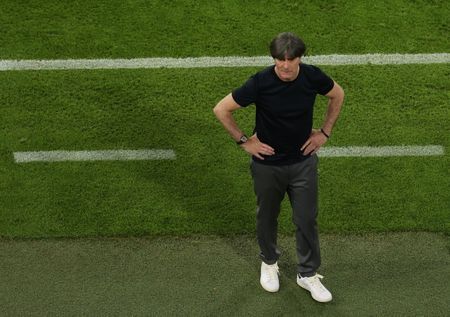 MUNICH (Reuters) – Germany coach Joachim Loew believes they can fix the problems that resulted in a sluggish performance in their 1-0 defeat by world champions France in their Group F opener on Tuesday.

An own goal by Mats Hummels gave France victory as the lacklustre hosts lost their opening fixture at the European Championship for the first time.

“Tomorrow we have to process things but look ahead,” Loew told reporters. “We lost, we are disappointed but we still have two games and we can fix it.”

The Germans next face holders Portugal in Group F before taking on Hungary, with all of their group games in Munich. Portugal beat Hungary 3-0 in Tuesday’s early game.

“We tried to play from the wings. We knew they were crowded in the middle and were tough on the one-on-ones. So we had to operate with crosses,” said the German coach.

“Robin Gosens and Joshua Kimmich did enormous work in attack and we also had that chance with Serge Gnabry. We maybe lacked the final punch in and around the box.”

Germany played without an out-and-out striker and Gnabry, who fired over the bar with one of Germany’s best chances, operating in the middle as a centre forward.

But the French were much sharper throughout and were lethal on the break while Germany only rarely managed to threaten.

Loew, in his last tournament in charge after 15 years, said the French ran a lot to close down the spaces but it was hard to shut out players like Kylian Mbappe out over a full 90 minutes.

“The goal was to go high to play it out to the wings,” Loew said. “We had enough attacking options.

“In the back we had to close the centre because they play amazing counter attacks. Mbappe you cannot shut him out over the entire game. (Antoine) Griezmann and (Karim) Benzema as well but overall we did it well.

“We tried everything,” he said. “We fought over ninety minutes but what we were missing was a goal. But the attitude was outstanding as was our ambition and I know we can bend this back into shape.”