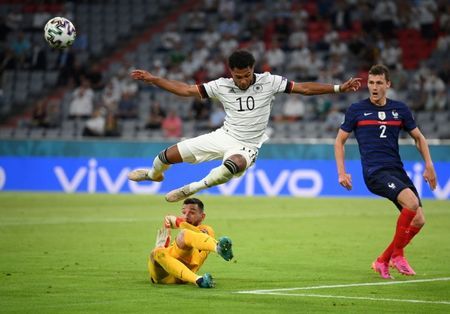 MUNICH, Germany (Reuters) – An own goal by Mats Hummels was enough to give France a 1-0 victory over Germany in their opening Euro 2020 Group F match on Tuesday as the sluggish-looking hosts lost their opening fixture at the European Championship for the first time.

The world champions took the lead in the 20th minute when midfielder Paul Pogba’s superb raking pass was fired back across the goal by Lucas Hernandez and defender Hummels shanked the ball into his own net as he tried to clear.

France’s Adrien Rabiot struck the outside of the post early in the second half and Kylian Mbappe had a superb finish ruled out for offside, while Germany’s misfiring attack struggled to get shots on target as they vainly chased an equaliser.

Mbappe was denied what looked to be a certain penalty after out-sprinting Hummels to chase down a long ball in the 78th minute and the French were denied once again when Karim Benzema’s late effort was ruled out for offside.