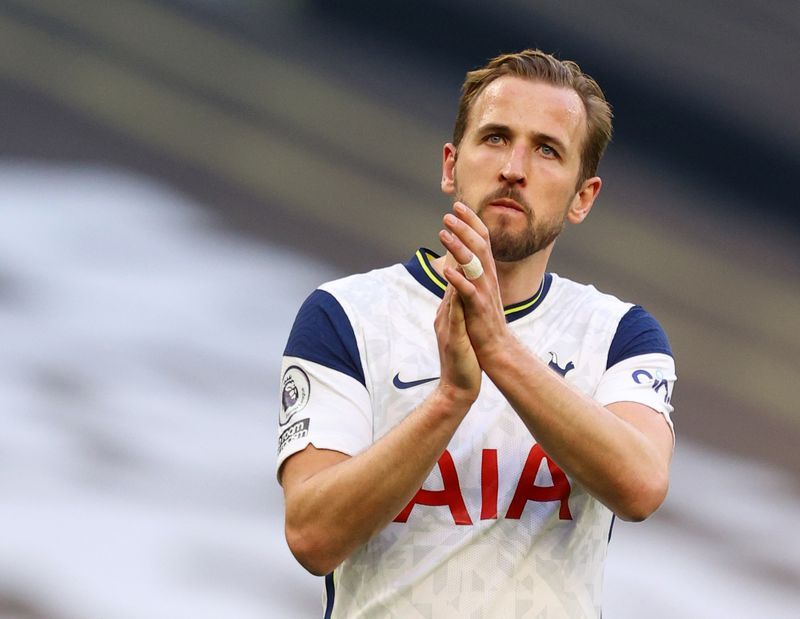 MANCHESTER, England (Reuters) – England and Tottenham Hotspur striker Harry Kane says he wants a meeting with chairman Daniel Levy and made the strongest hints yet that he wants to leave the club.

“It’s a moment in my career where I have to reflect and see where I’m at,” Kane said in an interview with Gary Neville’s Overlap YouTube channel.

British media have reported that Kane, who has been at Spurs since coming through the youth academy, has asked for a move away from the club in order to fulfil his desire to win trophies and compete in the Champions League.

Kane has a contract with the north London club until 2024, which could prove to be a stumbling block for a club looking to sign the 27-year-old who is valued at over 100 million pounds ($141.42 million).

Asked whether he was at a crossroads in his career, Kane said: “I think so. I think it’s definitely a conversation to be had with the club… I want to be playing in the biggest games. The biggest moments.

“Like, this season I’m there watching the Champions League, watching the English teams in there doing amazing. They are the games that I want to be involved in.

“So for sure, it’s a moment in my career where I have to kind of reflect and see where I’m at and have a good, honest conversation with the chairman. I hope that we can have that conversation.

“I’m sure that he’ll want to set out the plan of where he sees it but ultimately it’s going to be down to me and how I feel and what’s going to be the best for me and my career this moment in time,” added Kane, who is the club’s second highest all-time top scorer (220).

Levy will know that the club’s fans will be hugely disappointed if their top player is allowed to leave the club, with supporters hugely enamoured by the player they hail as ‘one of our own’.

However, the England captain said he had always had a good relationship with the Spurs chief.

“He’s been fair with me. He’s never kind of just held me on to a contract and said ‘No, I’ve paid you that. You’re going to stay on that’.

“So, we’ve always had a good relationship, but yeah, I’m not sure how that conversation will go if I’m honest, but you know what it’s like as players you don’t know what the chairman is thinking.”

But Kane suggested Levy might be willing to cash in on his top asset.

“I don’t know, I mean he might want to sell me. He might be thinking ‘If I could get 100 million for you, then why not?’

“I hope we have a good enough relationship. I’ve given the club… well, I’ve been there 16, 16 years of my life. So, I hope that we can have a good honest conversation and see where we are at in that aspect.”

Considering the merits of spirulina and green tea