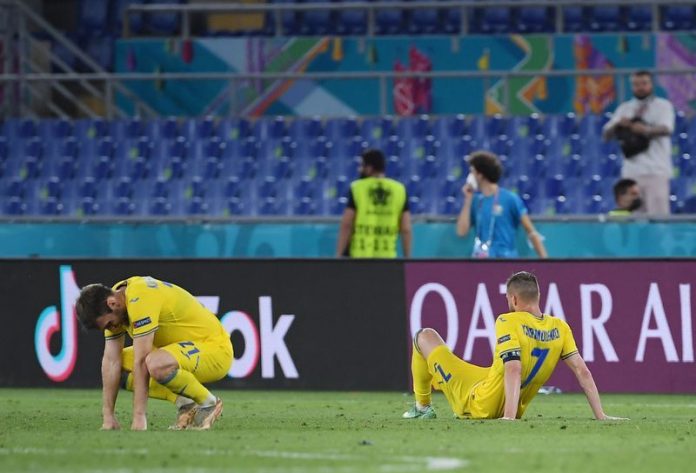 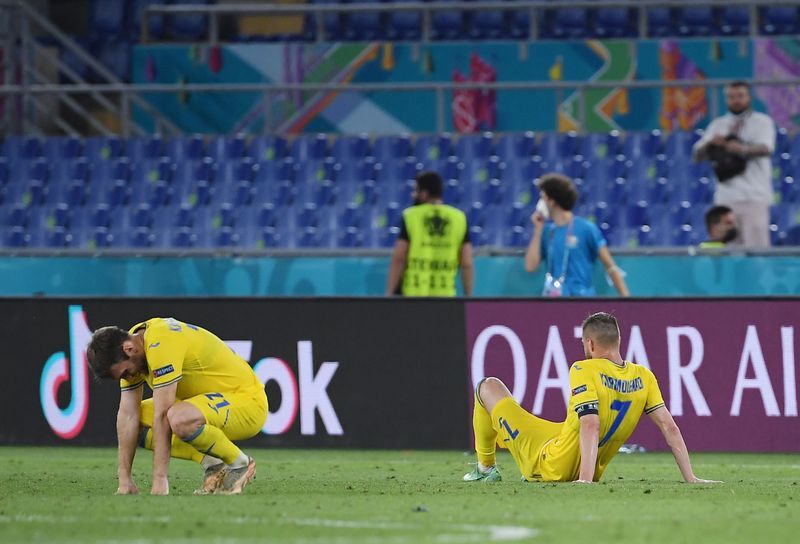 ROME (Reuters) – Ukraine enjoyed a fair slice of luck to reach the Euro 2020 quarter-finals and their 4-0 drubbing by England in the last eight summed up the weaknesses of a side which had benefited from a kind draw and some individual quality.

The Ukrainians had squeezed into the knockout stages as the fourth-best team among third-placed finishers, having edged out Slovakia and Finland on goal difference.

A laboured 2-1 win over big stage debutants North Macedonia, which came between the opening 3-2 defeat by the Netherlands and a 1-0 reverse to Austria, saw the Ukrainians book a last-16 clash with much more solid-looking Sweden.

A masterclass performance from Oleksandr Zinchenko helped them beat the Swedes 2-1 as the Manchester City wing-back scored a fine opener and then set up Artem Dovbyk’s last-gasp extra time winner after Sweden had Marcus Danielson sent off.

Up to that reckless tackle on an opponent which saw Danielson receive a straight red card, Sweden dominated the contest and only the woodwork coupled with some rugged defending saw a subdued Ukraine stay afloat.

But they had no chance against a rampant England who could have won by a bigger margin in Rome as the gulf in class between the two teams was everywhere to be seen in Saturday’s lopsided contest.

Ukraine’s manager Andriy Shevchenko, a former Serie A and Champions League winner with AC Milan as a player, pointed out that having only a handful of players plying their trade at the highest level limited the national team’s ability.

“Until we have a domestic championship at a good level, we will get to this level less often,” Shevchenko told a news conference after two goals from Harry Kane and one each from Harry Maguire and Jordan Henderson put Ukraine to the sword.

“In order to be able to compete with such players, you need to have players who play in the top five (European) leagues.”

Dropping a defensive strategy reliant on counterattacks for a possession-based philosophy paid dividends for Shevchenko on the road to Euro 2020, with Ukraine topping their qualifying group ahead of 2016 European champions Portugal.

But their best moment of the finals was a five-minute blitz against the Dutch, when they fought back from 2-0 down before they were sunk by a soft late goal, epitomising the team’s defensive vulnerability.

Clinical finishing from Roman Yaremchuk and Andriy Yarmolenko saw Ukraine through to the last 16, and Zinchenko stood out against Sweden, but that was as good as it got for Shevchenko’s outfit.

The legacy of a rock star