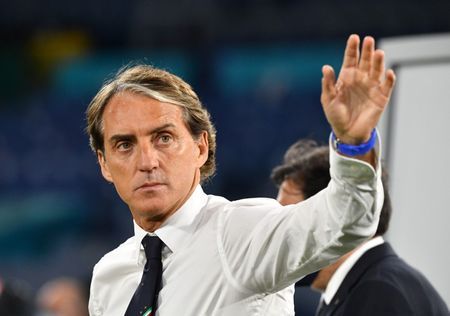 ROME, Italy (Reuters) – Italy coach Roberto Mancini said his “excellent” team can only improve ahead of their second European Championship match, against Switzerland on Wednesday, even though they made a near perfect start in their opening clash with Turkey last week.

Italy stretched their unbeaten run to 28 matches – two shy of the Azzurri record set nearly a century ago – with a 3-0 win last Friday in the Stadio Olimpico, leading many to consider Mancini’s side Euro 2020 title contenders.

“The Turkey game was difficult,” Mancini told a news conference. “But when we scored, they opened up. We will have to win the next one and if possible also the next one. We have to do our best.

“I am confident. This is an excellent team that can only improve. If the English bookmakers say (Italy are favourites), we accept it because they get it right, but the championship is still long. We have much work to do.”

Victory over Switzerland will see Italy become the first team to reach the knockout stages of Euro 2020, with one Group A match still to play.

However, the Italians have won their opening two matches only twice in their nine previous appearances at the European Championship, doing so in 2000 and 2016, and Mancini is not taking Switzerland lightly.

“Switzerland has always put Italy in difficulty,” he added. “They are always among the top rankings in world football, with good and experienced players, and they have a coach who knows Italy very well having coached here previously.

“It will be difficult, and we will need to be at our top level.”

Italy defender Leonardo Bonucci praised the togetherness of the group, highlighting team spirit as one reason for their resurgence since failing to qualify for the 2018 World Cup.

“Three years ago was a real low point for us,” he said. “Humility and keeping your feet on the ground are the secrets to competing like we did against Turkey.

“We have always reset after great wins, continuing to do our duty. The desire to return to the national team is back. It is thanks to the coach, we came from a dark place.

“The fact we are improving is a natural consequence of the good feeling among us.”

‘I was bullied for how I look’