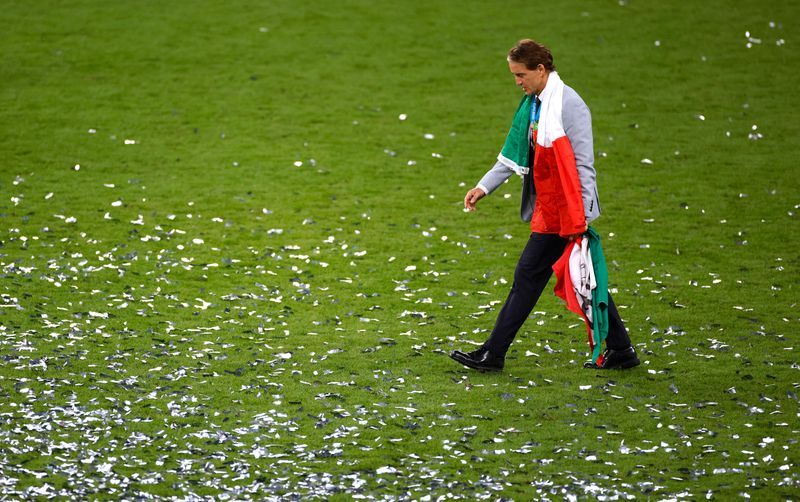 LONDON (Reuters) – Italy manager Roberto Mancini said watching three years of hard work come to fruition with Euro 2020 glory on Sunday reduced him to tears at Wembley after his side edged England on penalties.

The Italians went behind early to a Luke Shaw goal but equalised in the second half through Leonardo Bonucci, before winning 3-2 in a shootout after a 1-1 draw following extra time.

It marked Italy’s first European Championship title since 1968 and was the result of Mancini’s intelligent rebuilding of the national team following their humiliating failure to qualify for the 2018 World Cup in Russia.

Asked about the tears he shed at full-time, Mancini said: “That was the emotion that happens after achieving something incredible, of seeing the guys celebrate, the fans celebrating in the stands.

“It was seeing everything we have managed to create, all of the work we have put in over the last three years and specifically in the last 50 days, which have been very hard.

“We have got on very well, there have never been issues and the players deserve credit for that. Not just on the pitch, they did a brilliant job there, but I think it is the fact we have been able to forge this team spirit.

“They have created something that can never be separated going forward. They will always be synonymous with this triumph because they have so much respect for one another.”

Veteran defender Bonucci won UEFA’s star of the match award as he picked up his first international honour, nine years after losing the final of Euro 2012 to Spain.

The 34-year-old shouted “It’s coming to Rome” at the camera after the game, a response to the “It’s coming home” chant popular with England supporters.

“We heard it day in day out since the Denmark game, that the cup would be coming home to London,” Bonucci said.

“Sorry for them, but actually the cup will be winging its way to Rome and that way Italians all over the world can savour this competition.

“It’s for them, it’s for us, we have said since day one we believe we can do it. It is only right Italians celebrate in all four corners of the globe tonight.”

Bonucci is one of the oldest members of the squad, but youngsters like player of the tournament goalkeeper Gianluigi Donnarumma, midfielder Nicolo Barella and winger Federico Chiesa impressed at Euro 2020 to give hope for a bright future.

“We had the disappointment of the failure to qualify for the World Cup, but you always need to believe, strive for the top and never give up,” Bonucci added.

“This is a renaissance for Italian football. I’m sure now that this squad and coach will still make plenty of headlines going forward.”