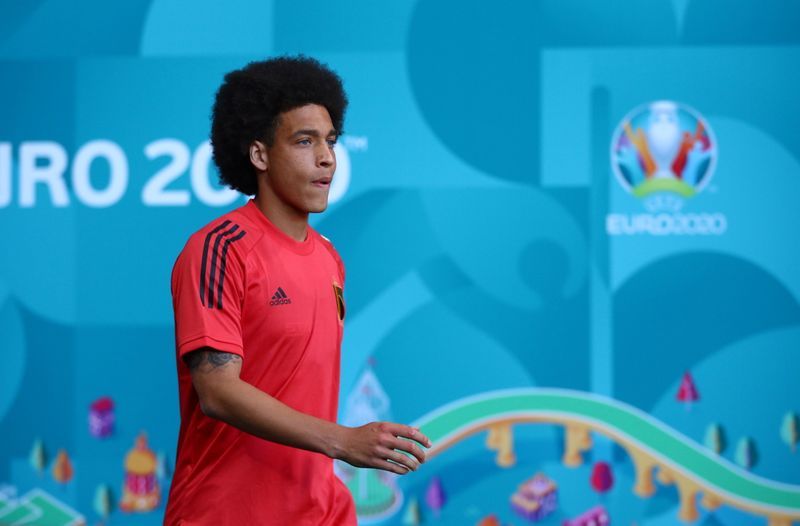 BRUSSELS (Reuters) – Axel Witsel has been hailed as Belgium’s “miracle man” after his sooner-than-expected return from a serious Achilles tendon injury, but he said his recovery came with doubt and sacrifice.

The midfielder tore his tendon in early January in Bundesliga action with Borussia Dortmund and, after surgery, was told it could take up to nine months before he played again.

But a determined approach to rehabilitation allowed him to accelerate the healing, culminating in a second half appearance against Denmark in the European Championship on Thursday – months ahead of schedule.

Belgium were trailing in their Group B match in Copenhagen but with Witsel, Kevin De Bruyne and Eden Hazard coming on after the break, they came back for a second Euro 2020 win.

“Maybe it wasn’t the ideal match to come back,” Witsel told a news conference on Friday. “It would have been better if we were already comfortably ahead. But now I’ve been thrown into the deep end and it worked.

“It is never easy to come back on, especially after five months on the sidelines. But I quickly gained possession of the ball and felt I got straight into the game.

“It was difficult in terms of rhythm, but that is also normal after a five-month break. In the end, everything is positive.”

But it had not always been so.

“It wasn’t until the beginning of May that I knew I could make it to the Euros. Then I started walking. Fortunately, I didn’t have a single relapse after that,” added the 32-year-old, who now has 111 caps.

“I believed in the process and worked on it every day. I knew I could speed up my recovery, but I also knew not to skip any steps. In the end, that hard work paid off.”

For Witsel that included hiring an apartment in Antwerp to be able to work on his recovery with doctors and physios.

“My family stayed behind in Liege and we all made sacrifices so that I could return. I had a very difficult time but thanks to my family and friends I made it through.”

He does not, however, think that his return should be described as miraculous as painted by both coach Roberto Martinez and Belgian media.

“It’s nice what I’ve done, but Christian Benteke had the same injury and also returned after five months and two weeks,” he said. “There is only more fanfare because I am returning to a big tournament.”