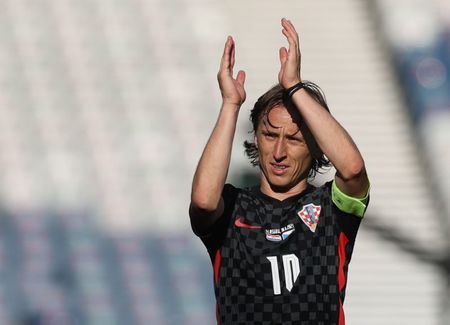 GLASGOW (Reuters) – Croatia captain Luka Modric and forward Ivan Perisic were disappointed after a 1-1 draw with the Czech Republic on Friday left their hopes of advancing to the Euro 2020 knockout stage hanging in the balance.

The Group D game at Hampden Park put 2018 World Cup runners-up Croatia on one point from two games following their opening 1-0 defeat by England. Perisic conceded they would have to improve in their final group match against Scotland.

“All the players have to give 20 or 30 percent more than they have done so far, otherwise we’ll be going home after the group stage,” Perisic, who netted Croatia’s equaliser in the 47th minute, told the country’s HRT state broadcaster.

“We scored in the second half but we didn’t produce what we are capable of. It will be tough against Scotland because we’ll be playing in front of their home fans and we have to talk things over and get ready.”

The Scots, who lost their opening match to the Czechs 2-0, were playing England at Wembley later on Friday.

Croatia were on the back foot in the first half against the Czechs who took a 37th-minute lead through a Patrik Schick penalty awarded after Dejan Lovren elbowed him in the face.

The Croatians had the upper hand after Perisic levelled with a thunderbolt into the far corner but then struggled to make their pressure count in the final third.

Modric, often forced to distribute passes from the edge of his own penalty area as Croatia’s midfield failed to carve out supply routes, said a poor start put paid to their hopes.

“It leaves a bitter taste because we were hoping for a win but didn’t get one. We were disorganised in the first half, we responded in the second but it wasn’t enough.

“We now have to win our final group match if we are to reach the knockout stages and that’s a good thing because it will show whether we belong there or not.

“We lacked confidence early on in the game,” Modric added at a post-match news conference. “We know the fans are unhappy because we are most unhappy.”

Coach Zlatko Dalic, whose deployment of Ante Rebic as a “false nine” backfired again after the winger was stifled out against England, said his side were ineffective in the first half because the players did not stick to the game plan.

“The idea was to raid down the right flank through Perisic and create space so that (Andrej) Kramaric could exploit space between the lines but it didn’t work,” he said.

“We spent too much energy chasing them individually all over the pitch and that wasn’t the game plan. It got better when we deployed Perisic on the left after the break but we didn’t do enough to win the game.”

In the final round of group games on Tuesday, Croatia play Scotland at Hampden Park while England take on the Czechs at Wembley.

When donating to people in a crisis, do it mindfully