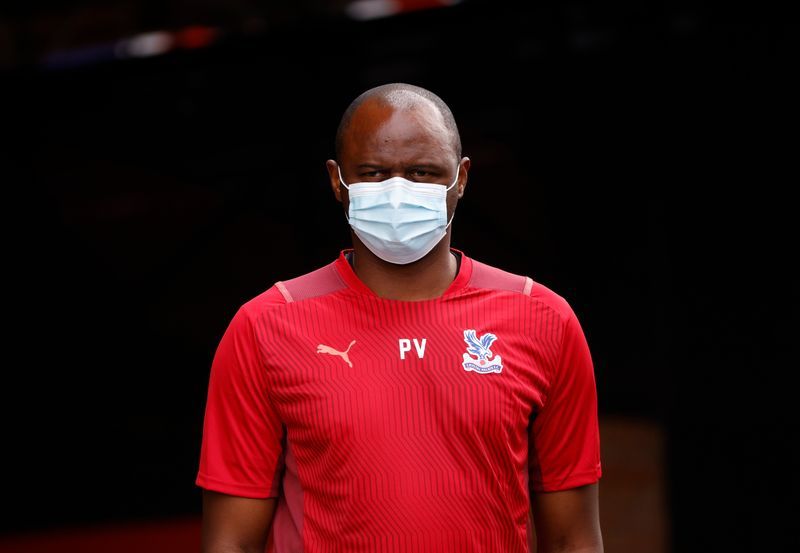 (Reuters) – Crystal Palace hold no fear going to Anfield to face Liverpool in the Premier League on Saturday and will not take a defensive approach, manager Patrick Vieira said.

Palace, who claimed their first win of the season against Tottenham Hotspur last weekend, are well aware of the attacking threat Liverpool possess with the London side suffering a 7-0 humiliation to Juergen Klopp’s team last season.

“Going to Anfield is going to be really challenging but there is no fear, there is excitement of playing one of the best sides in Europe,” Vieira told reporters on Friday.

“We’re really looking forward to the game because we want to challenge ourselves against those teams. You’re talking about one of the greatest teams in Europe, not just in the Premier League.

“We know their strength, what their front players are capable of doing… If we go there thinking about defending for 90 minutes, they will score goals because they have the ability to do that.”

Liverpool are level on 10 points with leaders Manchester United at the top of the league table with Palace in 11th on five.

Vieira praised Palace midfielder Conor Gallagher after his impressive display last weekend, but expressed caution regarding a potential England call-up, saying he needs to be more consistent in his performances.

Gallagher scored his side’s first two league goals of the season in the 2-2 draw with West Ham United last month and the 21-year-old Chelsea loanee has made a storming start to his Palace career.

“This is the biggest problem — when we see one or two performances, we always think he deserves a national call… He has the abilities, yes, but I believe it’s too early for a call for him,” Vieira said.

“His time will come, but first what he needs to do is to perform on a consistent basis, to allow him to go higher, to the international level. He needs to perform well week in, week out with us.”

Motorsport: Motor racing-Hamilton hopes to benefit from the boos

Bitcoin pushes towards document earlier than debut of futures-based ETF

‘Eternals’ evaluation: Marvel goes epic with an enormous step in a...