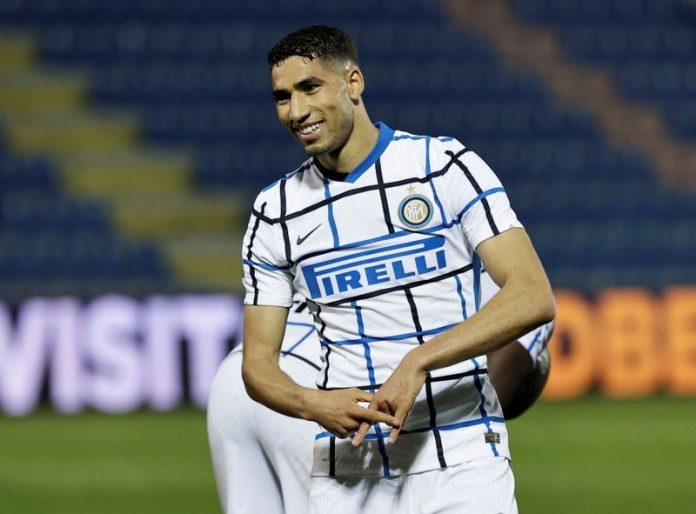 (Reuters) – Paris St Germain have signed Morocco international defender Achraf Hakimi from Italian Serie A side Inter Milan on a five-year deal for an undisclosed fee, the French Ligue 1 club announced on Tuesday.

The Spain-born 22-year-old came through Real Madrid’s youth academy before breaking into their senior team in 2017 and was part of the squad that won the Champions League, UEFA Super Cup and FIFA Club World Cup titles in the 2017-18 campaign.

French media reported that PSG paid around 60 million euros ($71 million) for the versatile right back.

Hakimi had a loan spell with German Bundesliga side Borussia Dortmund, winning the German Supercup in 2019, before joining Inter with whom he lifted the Serie A title last season.

“I feel a lot of pride today,” Hakimi told the club website.

“After my experiences in Spain, Germany and Italy, PSG offers me the opportunity to discover a new championship under the colours of one of the most prestigious clubs in the world.

“I can’t wait to meet my new teammates, fans and feel the extraordinary fervour that reigns at the Parc des Princes. I share the same high ambitions with the staff and the players and will do everything to give my club what it expects of me.”

Hakimi has won 36 caps and scored four goals for Morocco since making his debut in 2016.

Mauricio Pochettino’s PSG have already signed Netherlands midfielder Giorginio Wijnaldum after he ran down his contract with Liverpool while media reports say they are close to bringing in Italy goalkeeper Gianluigi Donnarumma and Spain defender Sergio Ramos.

QR code scam: What you should know before scanning codes via SMS