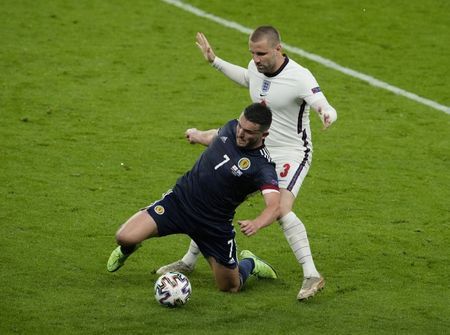 LONDON (Reuters) – Lacklustre England were held to a 0-0 draw by a determined Scotland in their Euro 2020 Group D match at Wembley Stadium on Friday.

England defender John Stones headed against the post in the 12th minute while for Scotland Stephen O’Donnell forced Jordan Pickford into a diving save with a fine volley.

After the break, Scotland goalkeeper David Marshall did well to keep out a low drive from Mason Mount while visiting striker Che Adams missed a good chance in the 78th minute, blasting over at the back post.

The result leaves England still well poised to progress, level on four points with group leaders Czech Republic who they host on Tuesday, while Scotland and Croatia have a point each ahead of their meeting in Glasgow on the same day.