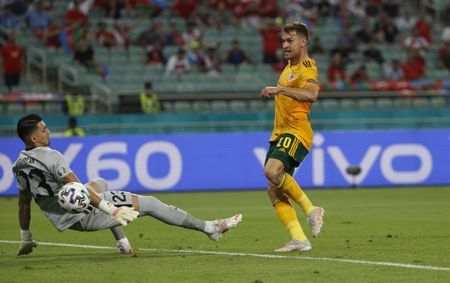 BAKU (Reuters) – Wales moved a big step closer to qualifying for the knockout stages of the European Championship after Aaron Ramsey and Connor Roberts scored in a 2-0 win over Turkey in their second Group A match at Baku’s Olympic Stadium on Wednesday.

Ramsey failed to convert two chances early in the first half but scored just before halftime when he made a run through the middle to chest down Gareth Bale’s perfect ball over the defence and slip it past the goalkeeper.

Wales could have doubled the lead at the hour mark when Bale was tripped by Zeki Celik at the edge of the box and awarded a penalty, but the Welsh skipper skied his effort after a stuttering run up.

Wales scored right at the death in injury time when a corner was played short and Connor Roberts was on hand to divert a Bale pass past goalkeeper Ugurcan Cakir to seal the victory.

(Reporting by Rohith Nair in Bengaluru; Editing by Andrew Cawthorne)

Other Sports: UEFA fail to get Danes to budge on border restrictions for Russian...