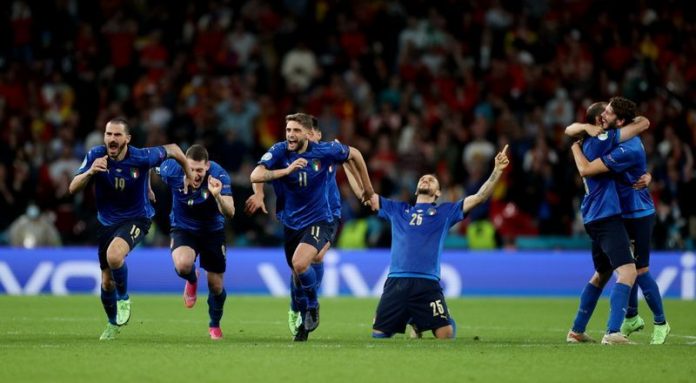 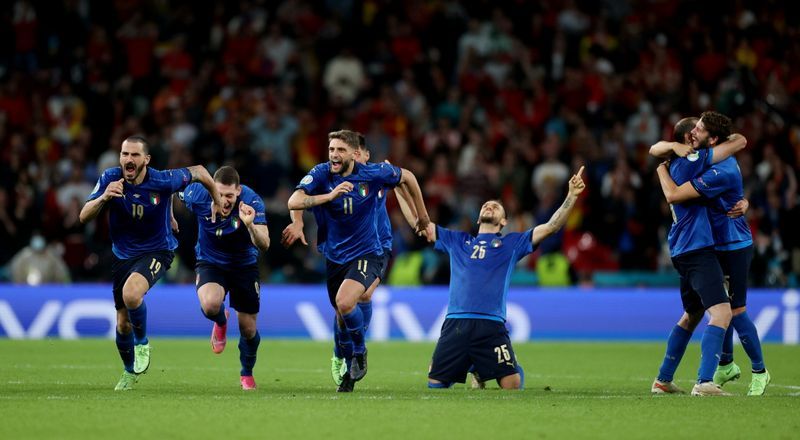 LONDON (Reuters) – When England players woke on Thursday morning, back at their secluded countryside training base St George’s Park, they will have no doubt felt the afterglow of the wild celebrations of their Euro 2020 semi-final win over Denmark at Wembley.

But while across the nation debris was being cleared from parties into the early hours, England will have faced their own more sober reality check.

For all the outpouring of joy, euphoric refrains of “Football’s Coming Home”, and hyperbole including one pundit’s call for a national holiday, England have not actually won anything yet.

In fact, the only thing “coming home” at this stage is England going back to Wembley for another match on Sunday in the final against Italy.

“It’s feet back on the ground this morning. Everyone enjoyed it last night but now we have to come up against one of the most experienced teams in world football in Italy, it will be more difficult than last night,” said former England winger and now BBC radio analyst Chris Waddle.

Roberto Mancini’s side are unbeaten in 33 matches and reached the final after a penalty shoot-out win over Spain.

This is only England’s second appearance in a major final but will be Italy’s tenth.

For the pundits, ex-players unable to reach a Euro or World Cup final in their career, and the long-suffering England fans, the delight is obvious at the ending of a 55-year wait.

But one of England manager Gareth Southgate’s most-used mantras in this tournament has been for his team to “make their own history” and not feel past burdens.

The approach has worked so far as England have avoided the pitfalls of so many other campaigns, beating old rivals Germany in the last 16 and not losing their nerve even when behind to Denmark and then going into extra-time.

Amid the high of Wednesday’s celebrations, Southgate again injected focus.

“Finals are to be won. We’ve got to regroup, prepare properly, and recover because tonight’s taken a lot, emotionally, physically. Italy had that as well. They have an extra day to recover,” he said.

“Italy are a very good side, I’ve thought that for the past couple of years. They’ve shown outstanding form, they’ve got defensive warriors at the back who have been through everything,” he said.

But there is more to Southgate than the usual coach’s cliche of “taking each game as it comes” and he is well aware of the emotional import of the tournament.

“We’ve had three memorable games on the bounce now. We’ve said we want to create memories for our nation,” he said.

And while it may take a little while to sink in, the abiding memory of this tournament for England will be defined not by beating Germany, nor putting four goals past Ukraine or the victory over Denmark, but by the outcome of Sunday’s final.

Italy know all about that: they lost their last two appearances in Euro finals in 2000 and 2012 but sandwiched in between was their 2006 World Cup triumph.

Every Italian fan can remember Marcello Lippi’s lineups from their successful campaign in Germany, but fewer will recall the defeated players from the Euro final losses.

The 60,000 crowd on Sunday will be overwhelmingly English, just as it was when the team won their only major title, the 1966 World Cup. The names of that team have never been forgotten.