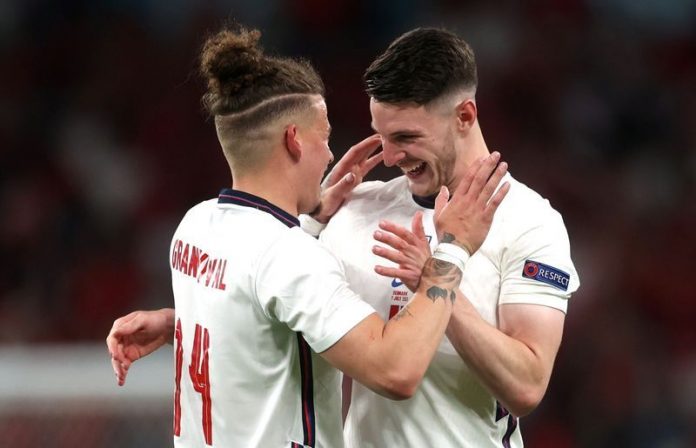 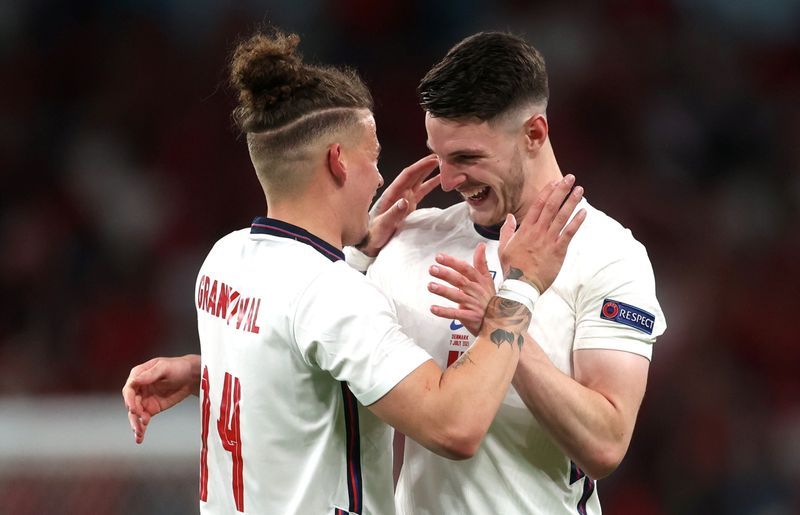 LONDON (Reuters) – England have had some outstanding midfield partnerships over the last 50 years, players who have ruled Europe with their clubs, but Kalvin Phillips and Declan Rice have emerged as the unlikely pairing now set to conquer the continent for their country.

David Platt, Paul Ince and Paul Gascoigne tasted the semi-finals of Euro 96 and/or the 1990 World Cup, while Frank Lampard and Steven Gerrard were among the best in the world for several years but could never quite seem to produce their best when in tandem for England.

Colin Bell and Norman Hunter were also a world class duo but were part of the team that failed to make the 1974 World Cup, and they were followed by a succession of domestic greats who never got close to glory on the international stage.

Now, a player who this time last year was helping Leeds out of the championship and a 22-year-old who was rejected by Chelsea as a teenager have formed the midfield shield that helped England through five games at the tournament without conceding a goal before Mikkel Damsgaard’s free kick for Denmark spoiled the record in the semi-final.

As tactics come full circle, it is probably the relentless energy and terrier-style snapping of the Nobby Stiles/Alan Ball combination from England’s 1966 World Cup-winning team that Rice and Phillips come closest to in terms of how they operate within the team.

Both have the ability to drive forward and deliver penetrative passes, which they do for their clubs, but both have also shown the tactical discipline demanded by coach Gareth Southgate to generally hold, and dominate, the space in front of the back four.

They both have a ravenous appetite for work and chase, harry, spoil, intercept and anything else they can think of to put the opposition off their stride.

Phillips began the tournament with a man-of-the-match display in the win over Croatia, while Rice was equally effective in snuffing out the threat of Luka Modric, having admitted he was “miles behind him” when watching England’s World cup semi-final defeat from afar in 2018.

Against Germany the destructive duo faced the superstar pairing of Tony Kroos and Leon Goretzka – Leeds and West Ham v Real Madrid and Bayern Munich – and did an absolute job on them, starving them of time and possession and breaking up almost every developing attack.

“We faced players like Kroos, Goretzka or (Ilkay) Gundogan and people said that Kalvin and I could not compete against them. We had to fight each ball as if it were the last of our lives,” Rice said.

The return to full fitness of Southgate favourite Jordan Henderson led some to believe that the Liverpool captain would find his way back into the starting team, probably at the expense of Phillips, but the coach was not about to change a winning formula when on the brink of England’s greatest moment for more than half a century.

“He’s just a very good footballer,” Southgate said of Phillips. “High performance, low maintenance – we like that a lot.”

West Ham manager David Moyes has said pretty much exactly the same about Rice, who has grown in confidence since Moyes made him club captain at 21 and now swaggers around Wembley with his chest puffed out as if he owns the place.

His displays have been all the more impressive given that he suffered a knee ligament injury on March 31, putting his Euros participation in doubt.

Both players will need to drain the fitness tanks again to keep Italy at bay in the final but should they do so their names will sit deservedly alongside those of Ball, Stiles and rest of the boys of ’66.