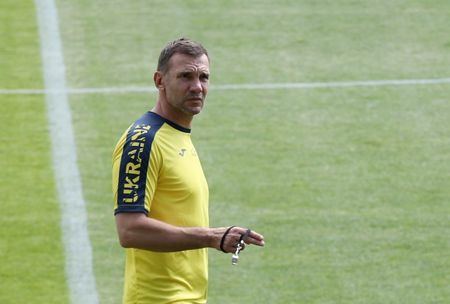 BUCHAREST (Reuters) – Ukraine coach Andriy Shevchenko has deployed an adventurous 4-3-2-1 formation against North Macedonia in their Euro 2020 Group C match in a bid to keep alive their hopes of reaching the last 16 of the 24-nation tournament.

Ruslan Malinovskyi has been moved upfield to play alongside captain Andriy Yarmolenko on the flanks behind striker Roman Yaremchuk, with Mykola Shaparenko getting the nod to partner Oleksandr Zinchenko behind the three-pronged attack.

Taras Stepanenko is picked as the holding midfielder as Serhiy Sydorchuk, who was substituted in the opening 3-2 defeat by the Netherlands, is left on the bench.

The North Macedonians, beaten in their opening game by Austria 3-1, fielded a 3-4-2-1 line up with Eljif Elmas partnering 37-year old captain Goran Pandev up front as Enis Bardi is placed in a playmaking position behind them.

(Reporting by Simon Jennings in Bengaluru; Editing by Christian Radnedge)

Tennis: Tennis-Tsitsipas seeks to mix things up on different surfaces