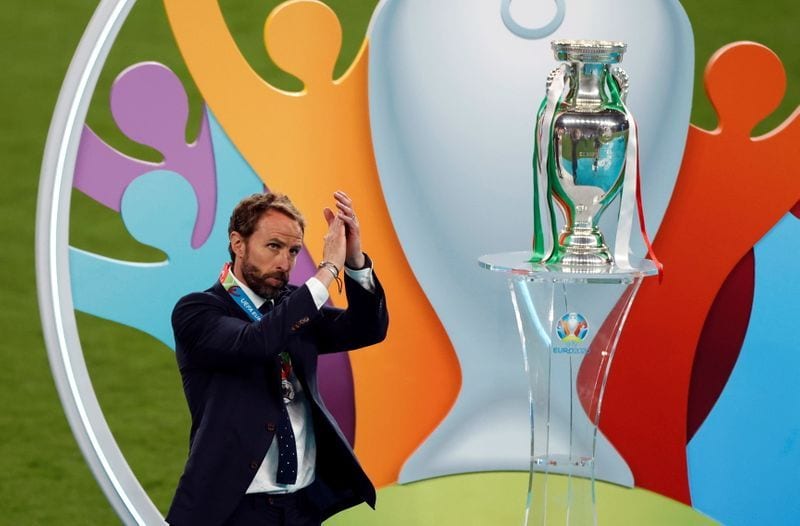 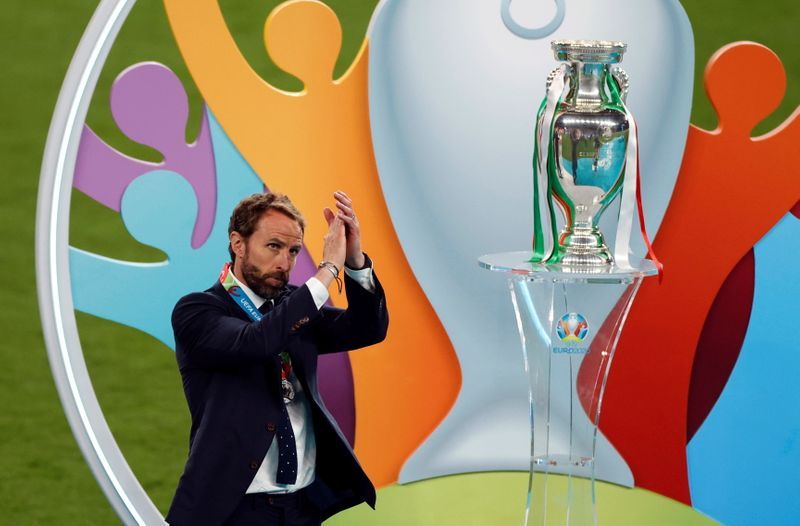 LONDON (Reuters) – England manager Gareth Southgate certainly has a well tuned sense for judging the mood and avoiding the traps that some of his predecessors have fallen into.

So with England fans still digesting the bitter reality of their penalty shootout defeat by Italy in Sunday’s Euro 2020 final, his political skills were put to good use in Monday’s news conference.

Southgate’s decision-making in the game — his ill-fated choice of penalty kickers, his delayed substitutions and his tactics — are all part of the inquest into the loss and rather than wade into that debate with a strident defence of his choices, he opted to reflect on the nature of these moments.

“You make hundreds of decisions day in, day out, during the tournament. Some you get right and some that you don’t. You have to get more right than wrong. So I take responsibility and take the criticism that comes with that. I have to take that,” he added.

“If I didn’t get all the decision right last night, so be it. I have to live with that.”

He avoided making a commitment to continue on in his role, which might have provoked some of his critics, saying he needed “time to reflect”.

But nor did he indicate he wouldn’t take charge of the team for the Qatar World Cup qualification campaign which starts in September. [L1N2OO0P2]

Few expect him to walk away from a talented squad of players but the support, even bordering on deference, shown to him from pundits is likely to take on a more critical tone now.

Gary Lineker, the former England striker turned BBC presenter, was quick out of the blocks to identify one of the areas Southgate should look to change.

“I think going forward England have to find a way of being more attack minded. Braver in possession and throwing more people forward. We have the forward talent to scare teams, at present we seem scared ourselves to release that talent,” he tweeted after the game.

England went into this tournament with an impressive array of young, attacking talent including Jadon Sancho, Marcus Rashford, Jack Grealish and Phil Foden, but none of them were given consistent central roles in the side.

There is no shortage of quality attacking players available to Southgate with Manchester United’s exciting forward Mason Greenwood missing the tournament through injury and Leicester City’s creative midfielder James Maddison looking to get back in the picture.

With such options — and with a World Cup semi-final and Euro final already to his name — there is reason for Southgate to be optimistic.

But as a thoughtful and analytical man, Southgate will also look at his own tactical choices and his failure to make substitutions which shifted the momentum in the way his counterpart Roberto Mancini was able to do.

“People’s thoughts were maybe before the tournament that maybe sometimes he can be conservative… he maybe fell into that,” said ex-England player and pundit Rio Ferdinand.

“I thought that we could have been more positive in this game, that is one criticism I would level at him. You look at Mancini, they go in at halftime, they adjust things and they come out and they dominate possession…

“That is because of game management from a coaching perspective — he has seen something and he has changed it,” he added.

But Gary Neville, another of those former England players who failed to reach a major final, was supportive of Southgate.

“I think Gareth knew he had to play a certain way to get to the final and he did that. At the end it comes down to small margins, details like penalties. This is not the time to be criticising tactics and substitutions,” he said.

“The reality is that Southgate has proved so many of us wrong – not just in this tournament but over the last two years – about decisions he has made – it would be a nonsense now to start suggesting we are right about substitutions and penalty-takers when most of us have not seen this in our lifetimes.”

Football: Soccer-France are in ‘group of death’ at Euros, says Ben Yedder