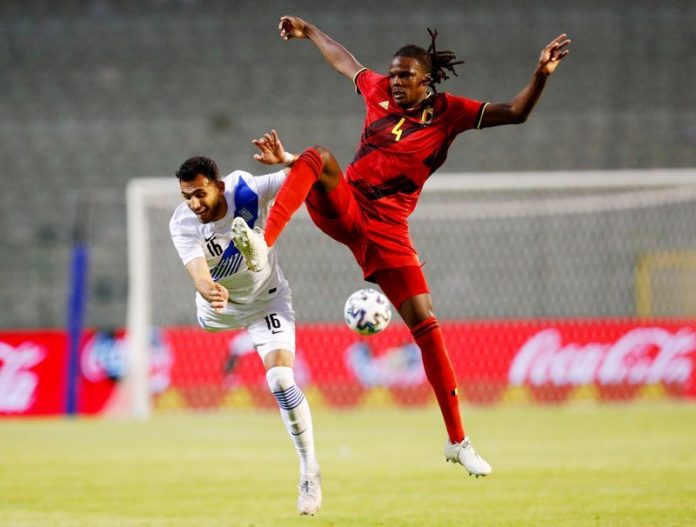 BRUSSELS (Reuters) -A spirited Greece fought back to hold top ranked Belgium to a 1-1 draw in their friendly international in Brussels on Thursday as Georgios Tzavellas’ second half goal cancelled out an early strike for the hosts from Thorgan Hazard.

Belgium were missing several regulars like Thibaut Courtois, Kevin De Bruyne and Eden Hazard, but they were still hoping to send out a message of intent ahead of next week’s kick off of the European Championship.

But Greece, who did not qualify for the tournament, proved dogged opponents with little regard for their hosts’ status at the top of the FIFA rankings in a feisty clash behind closed doors at the King Baudouin Stadium.

Hazard put Belgium ahead after 20 minutes but Tzavellas levelled the score midway through the second half.

Greece started brightly and twice, in the opening 10 minutes, forced sharp saves out of home goalkeeper Simon Mignolet before Belgium settled into a pacy rhythm that threatened to dominate the game.

A point blank save from Greece keeper Odysseas Vlachodimos denied Romelu Lukaku, who was captaining Belgium for the first time, a chance to score after 14 minutes but it took just six more minutes before Hazard’s goal.

It was Hazard who set it up, winning possession in the centre circle, spraying it out wide to Yannick Carrasco and then sprinting half the length of the field to finish off the return pass at the near post, forcing the cross in off his knee.

Hazard should have scored a second, just after the half hour mark, when Jeremy Doku set him up with a square pass but he hit his effort into the side netting.

Greece kept in the game with strong defence and looked to catch Belgium on the counter attack, having a good chance on the hour mark when Giorgos Masouras could have done better at the end of a ball over the top of the Belgian back four.

But six minutes later, he whipped in a free kick that was met by a diving header from Kyriakos Papadopoulos, which crashed his effort against the upright. The rebound fell perfectly for Papadopoulos’ centre back partner Tzavellas to equalise.

Belgium play a second warm-up before Euro 2020 at home to Croatia on Sunday. Their first game at the tournament is away against Russia in St Petersburg on June 12.

Registering the unregistered: How Malaysia plans to vaccinate ‘invisible’ communities

iPhone taken a dunking? It can still be saved from water damage

Flowers for women in Russia, but not all want to celebrate