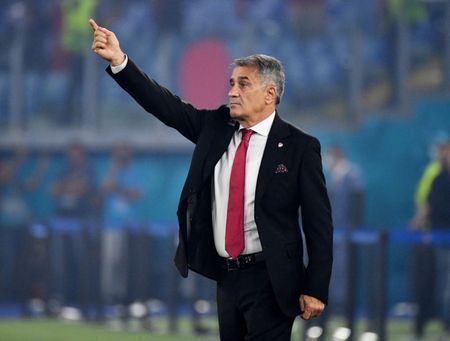 ROME (Reuters) – Turkey’s players and coach Senol Gunes apologised for a poor performance after the team were soundly beaten 3-0 by Italy in the opening game of Euro 2020 at the Olympic Stadium on Friday.

Defender Umut Meras and forward Kenan Karaman said the team would put on a better display in their remaining Group A games against Wales and Switzerland.

“We are really sorry about our performance tonight,” forward Karaman said. “Italy were technically superior to us. But it’s a tournament and we have to focus on our next two games.”

Roberto Mancini’s side were frustrated by Turkey’s defensive approach but broke the deadlock in the 53rd minute when Domenico Berardi’s cross flew in off defender Merih Demiral for an own goal. Ciro Immobile and Lorenzo Insigne then wrapped up the win.

Left back Meras also apologised for the poor showing.

“We couldn’t reflect on the field what we had in mind. We are sorry. We aim to get six points from the remaining two matches in the group,” he said.

Turkey’s veteran coach Gunes, who led the team to third place at the 2002 World Cup, criticised the display.

“I was expecting a better game, and I am disappointed. We lost to the hosts, and we are sorry,” he said.

Gunes said Turkey’s tendency to play too much in their own half and repeated misplaced passes under pressure from the Italians were to blame for the setback.

“I am proud of my players for the fight they put in but Italy completely controlled the game. Even if we had won or drawn this game we would be criticising the team.”

“Naturally we are very sorry right now but it doesn’t mean we will not be ready for the Wales game (on Wednesday). On the contrary, we will be motivated further.”

Suspect remanded a week over couple’s murder in Bercham