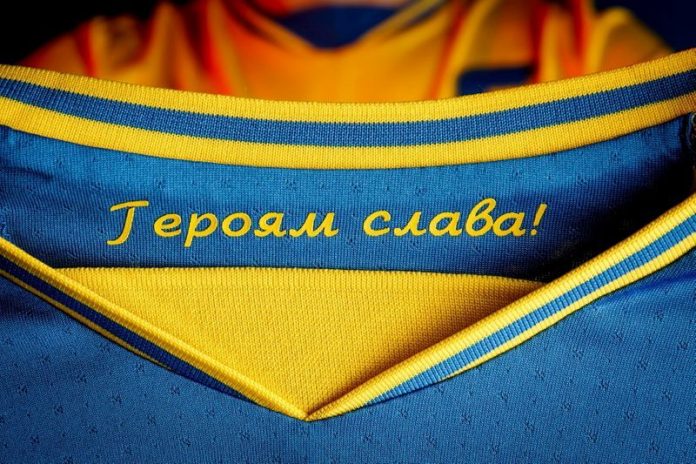 KYIV (Reuters) – Ukraine’s national football association will convene an emergency meeting of its executives to approve UEFA-banned slogans as the country’s official soccer symbols, the head of the association said.

European soccer governing body UEFA told Ukraine on Thursday it could keep a map showing Crimea on its new national shirt despite objections from Russia but said it must remove the phrase “Glory to the heroes” due to military connotations.

The president of the Football Association of Ukraine, Andriy Pavelko, said on Facebook late on Thursday that the association would approve the slogans “Glory to Ukraine” and “Glory to the heroes” as the country’s official football symbols, while the emblem of the national team would be the image of Ukraine’s map with Crimea and Donbass.

Ukraine’s kit, due to feature in the European Championship, has stirred rivalries with Moscow because it includes an outline map showing the peninsula of Crimea, which Russia annexed in 2014 but which remains internationally recognised as part of Ukraine.

“Football symbols of Ukraine, long recognised by all our fans and the football community in general, must be protected and immortalised in the football tradition of our country,” Pavelko said.

“Thank you to all our fans for the crazy support of Football Association of Ukraine and the new design of the national team uniform,” he added.

Ukraine had said the shirt was a symbol of national unity. President Volodymyr Zelenskiy posted a selfie on Instagram with the jersey on this week and his office defended the slogans as “absolutely correct”.

Relations between Moscow and Kyiv collapsed after the annexation of Crimea and the start of a Russian-backed separatist conflict in eastern Ukraine in 2014 that Kyiv says has killed 14,000 people.

On Thursday Pavelko flew to Rome for emergency talks with UEFA and said the talks would continue Friday morning.

Football: Soccer-Buffon to continue playing until 46 after signing new deal

The papers: 'Russian retreat' and calls for P&O chief to quit