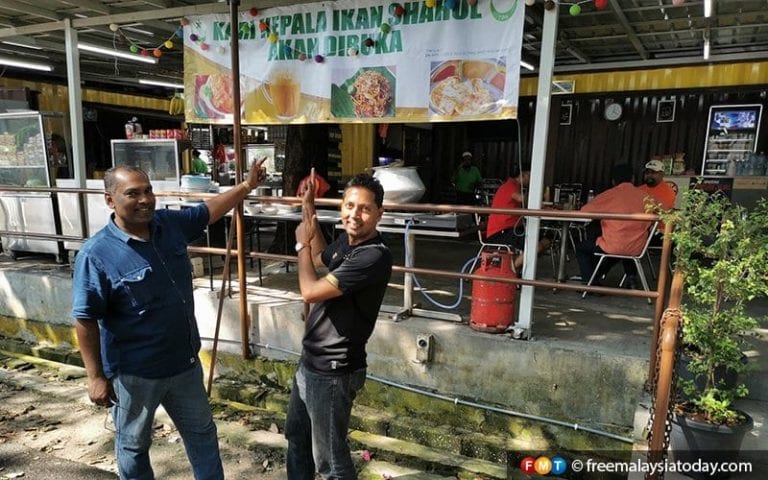 Ex-City skipper and defender P Saravanan and midfielder Shahul Hameed looked for another challenge to tackle and are now calling the shots at Kari Kepala Ikan Shahul in Cheras.

Hard times needed them to think out of the box, so the old friends decided to convert a cargo container into a restaurant and plop it on 1/199, Taman Bukit Hijau, Taynton View.

Saravanan, 47, lost his sole source of income when he had to abruptly close his 12-year-old football academy due to the Covid-19 pandemic.

Shahul, also 47, was looking for a food business opportunity after selling his restaurant to help his son, Ash, achieve his dream of becoming a top footballer.

Fate brought the KL youth teammates together and they set their plan in motion with a capital of RM60,000.

They decided to do fish head curry and biryani rice besides other street fare. The food is prepared by a hired cook and Shahul’s relatives.

Saravanan said they opened for business on June 24 and due to a surge in patrons operate from 7am-midnight.

It has become a meeting place for their former teammates and other sportsmen, he added.

“It’s hard work but these are difficult times and we have to double up on our efforts just as we did on the pitch,” said Shahul, who played for the KL Razak Cup and the national Under-18 teams in the late 80s.

“Nothing comes easy and we will focus on the business and hopefully expand it,” said Shahul whose playing career ended prematurely in 1991 due to injuries.

Saravanan said he was glad business was picking up as it proved that hard work does bring rewards.

He said he was disappointed that footballers were selling their winner’s medals to overcome hardship, referring to star players Khalid Jamlus and Jamsari Sabian, who recently caused a stir when they parted with their prized memorabilia.

Saravanan hopes to restart his football academy at Cochrane Road now that contact training is allowed under the Covid-19 recovery movement control phase.

Fake or not? Check our quick fake news buster here.